Some retailers were privately praising Wizards of the Coast for pulling their PDF's from the Internet, while I'm still on the fence. I really don't know how these electronic products effect our brick and mortar sales. Are they supplemental sales? Are they replacement sales? Who knows? Besides the obvious concern that these are replacement sales, and some certainly are, the second biggest fear, one that I subscribe to, is that these electronic versions devalue the marketplace.

In other words, if an electronic version of a $50 hardcover book is regularly discounted at 35% off (the current Paizo sale and regular Amazon print price), the customer perception is the book has a value of $33. Buying that book for anything over $33 is foolish, or so the Internet logic goes. It's the Amazon effect, but it's perpetuated with electronic products. So what was the response to the WOTC debacle from digital RPG providers? Lets have a sale! Paizo, Green Ronin and others went on the offensive with a sales drive. No offense to them, but as a retailer it makes me wonder if they understand how to actually sell things. Or perhaps my brick and mortar sensibilities are irrelevant in a digital world.

So what's so wrong with sales and product devaluation? First, from a retail perspective, customers are being trained for sales and will learn to only buy items when on sale. It's retail 101. It's Pavlovian; shopping dogs that we are. Second, whether or not digital products are supplemental or replacement products, the perception is that of a lower value, which eventually translates into lower sales for products at full price. As a customer, that sounds great, but the reality is that stores simply won't carry products at a reduced margin. They can't keep the lights on. They'll move on to selling other things.

The theory goes:
This is a war games scenario, where the only people playing role playing games in the future will be white haired old men at game conventions (myself included). Game stores, many of whom have seen a decline in RPG sales over the last few years, will still be around, but they'll be selling other things, or get this, maybe only Dungeons & Dragons because Wizards of the Coast has preserved their brand value. It's the old Taco Bell effect from Demolition Man that I've mentioned before, where in the future all role-playing will be Dungeons & Dragons.

That's rather simplistic and it ignores the fact that free is the ultimate brand value eroder. Pulling out does nothing to stop piracy. Still, if your company is all about selling stuff, wouldn't you want to avoid this issue for as long as possible? Isn't there potential that an iStore or a DDI solution could come along in the future to preserve your brand value, make you money and ensure your survival? 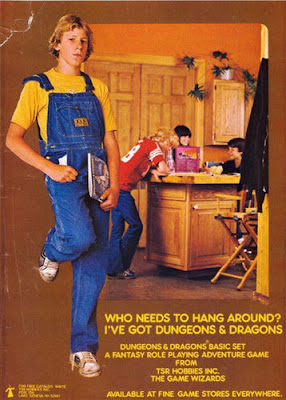