Last year around this time I reported that our RPG sales were down 20% in 2009. This year I can happily report that they were up 15% in 2010. It's partially the roller coaster of sales patterns, but the big trend in 2010, in case you weren't paying attention, was Pathfinder. Here's the chart from last year showing that D&D was dragging down our numbers. It also shows what I now consider to be a rather unhealthy dependence on the venerable brand. 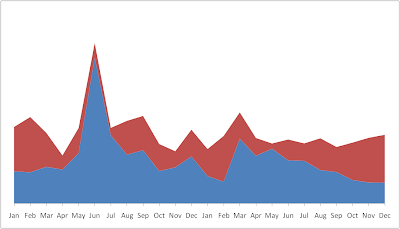 D&D is blue, the bedrock of our RPG department. Red is everything else.
The chart below shows the last 6 months of the chart above and continues on for another year. You can see how we began promoting Pathfinder (in red) about half-way through, providing a second bedrock for our RPG sales. In fact, Pathfinder outsold D&D in five months of 2010. As I've mentioned before, we're not looking for a winner here. We want all our RPGs to do well, but relying on D&D to keep RPGs alive in the store seems not only dangerous, but lazy. If you're a store owner following the cancellation of the D&D miniature line and the paired back 2011 D&D release schedule, you might be in the market for some RPG insurance.

So what are we doing in 2011? I have to admit that the "Is Indie Dead?" discussion got me looking around at what other stores are doing with their non-D&D role-playing games. I'm not interested in "indie" so much as the category of "other," good, mainstream stuff that's not Dungeons & Dragons. Most top tier stores have special RPG events focusing on these types of RPGs.
We decided to follow their lead and we implemented a non-D&D RPG night once a month. This has opened our customers and staff up to some fantastic role-playing games. Some, like Eclipse Phase, were already on our shelves but were relatively unknown. Others were already popular, like Deathwatch, but are getting some extra excitement generated around them. Excitement is contagious and we've had strong sales of these games that are pretty easy to correlate back to the events.
Posted by Gary Ray at Friday, February 04, 2011