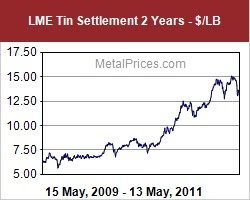 “It’s not like we can be clever and somehow work around the price increase of silver and these other materials, we have to pass it on to our customer, or go out of business.” Source
Metal miniatures are made primarily of tin and as you can see from the chart above, the price of tin has skyrocketed. Tin has doubled in the last year alone. Worse, it's expected to continue to rise for the rest of the year as Indonesia tweaks supply and China and other manufacturing countries suck up demand for use in electronics. This has really put the squeeze on miniature companies. Some have steadily raised their prices over the years. Others, like Reaper, have started doing some miniatures in lead again, like in the old days. The modern alternative to tin has often been plastic, but the cost of oil has also skyrocketed, so there's no refuge there.

Games Workshop has decided that tin is not in their future. Yet, plastic has a very expensive start-up cost for a model, along with that increase in oil, so the metal miniatures, which almost by definition of their being cast in metal, sell less than plastic, are not good candidates for true plastic sets. They want to instead do something else, some sort of resin or cheaper plastic, or hybrid. It's all rumor, because they haven't communicated their strategy. Instead, metal models have simply begun to disappear.

That means those racks of blisters we sell are going away, along with many of the box sets. For now, those models are just not available. We can order them, but they don't come. Almost everything metal that's not a recent release seems to have been sent to the direct side. Worse, the supply of those metal models is dwindling, and according to my sales rep, there are no more coming beyond whatever is on the high seas. A shipment or two may be on a boat somewhere, but if I'm told a model is not available today, it's probably not going to be available anytime soon.

The dilemma for me involves a couple issues. The first is the natural instinct to horde stuff that sells well. I don't sell metal models out of a sense of loyalty, I actually make money on the vast majority of the 40K metal. We stock every 40K item in production, and that includes a ton of metal models. I very much want them in some form or another. However, I was told it was not in my best interest to horde and that something else would be along soon. But when?  So for now, I'm letting my racks go bare. It's also becoming clear that the opportunity for hording is probably over.

The second part of that dilemma is very retailer centric. As existing metal models sell and there are no replacements, the inventory dollars naturally shift to other areas of the store. If I was Wal-Mart with a sophisticated open-to-buy program, I could horde that GW cash for when the tin replacement arrives. However, being a small time operator, that money goes towards other things, the flavor of the day, like new CCGs. When those non-metallic replacements finally arrive, I won't have the resources to suddenly bring them all back in, although it's unlikely they would arrive in such a fashion.

This also means that our number two game, 40K, is going to naturally see sales flag, as there is simply less product to sell.

As a store owner, I hate blisters. They're expensive, small and easy to steal. Plastic is clearly superior to metal for assembly and modifications. I welcome the move away from metal, but I was hoping for a more orderly transition. I'm sure the sales reps at GW had also hoped for something more orderly, as they're likely tired of giving excuses as to why Games Workshop hasn't communicated their strategy. And now you know everything I know.
Posted by Gary Ray at Sunday, May 15, 2011