I blog a lot less lately. However, that decline comes from a ridiculous high of more than one post a day in 2008. Posts have steadily dropped in half each year since then. In the beginning, it was about the excitement of the move to our bigger location, along with thoughts on the game trade that nobody seemed to be expressing. It was also a place to show whatever gaming project I was working on, usually to a few friends who read the blog. Now the blog is tied into Facebook and Twitter and heaven forbid, people I really respect pay attention to it. There's also a tremendous amount of content that just goes direct to those social mediums, voracious monsters that require constant feeding.  In other words, both the medium and the audience have begun to conspire to change the message.

This is fine and probably for the best. I have no plans to stop blogging or even editing myself for content to any great extent. I do feel more of a  responsibility to write better, more concisely and more consistently. You could do a lot worse than trying to emulate a five paragraph high school essay. It's now in the back of my mind when I post. Before, when I didn't think anyone was reading, I felt like I was blathering on to myself, like a journal or diary.

Those are my thoughts on how I see the blog going forward: much like it did, less often, better and more concise. And now some miniatures I've painted lately for my Pathfinder Legacy of Fire campaign. My painting skills are best described as "improving." Did you think all I did was complain and talk about the game trade? 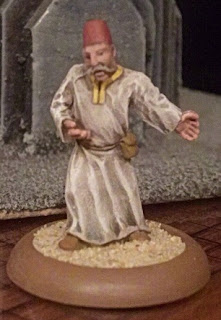 Reaper Chronoscope "Moroccan Merchant." This is actually my Kelish PC (inquisitor of Abadar) for Serpent Skull, but will get double duty in LoF. 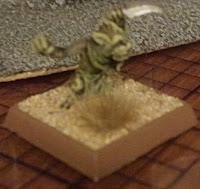