This week marked an inflection point for D&D in my store. It was the predicted point in which Pathfinder finally overtook it and will undoubtedly continue its lead for the foreseeable future. I ran the numbers on this because of another phenomena out there, the disappearance of Dungeons & Dragons 4th Edition books, of which some are fairly new. Titles like the Dark Sun Campaign Setting, released less than a year ago, are just done, their existence removed from our distributors system. They are unobtainable it seems. Other books are being clearanced out, as distributors failed to realize predicted strong sales. I picked up a few Player's Handbook 2 as they were being dumped.

I'm not a hater, really, and for the most part, I use these opportunities to stock up on D&D books. Also, that Dark Sun Campaign Setting book will be hunted to the ends of the earth to keep it in stock. My store does very well with D&D and I'm not done yet. Sales of these books may have slowed, but slow D&D still sells vastly better than game number three, whatever that is. To be fair, a lot of this is likely due to the print and forget strategy of Wizards of the Coast. A big hullabaloo occurred last year when they announced they wouldn't be reprinting the core rulebooks. The reasoning, it turned out, was that they printed a gazillion of them and wouldn't be running out in the foreseeable future, so there's no need to print more. Unfortunately, that's not true for some of the other books.

This is only shocking because we have special expectations of Dungeons & Dragons and I can't recall any third edition product that went out of print during that near decade of strong sales. Other publishers let product go all the time. Paizo has a long list of out-of-print product and product they regularly announce is running low in their warehouse. Nobody predicts the demise of Pathfinder because of this. D&D is just held to a higher standard and when it goes out of print, it reminds us (me really) of the dark days of 2nd Edition, when TSR was gone and we had to hunt down books across long distances. I recall driving 90 minutes to Santa Cruz just to pick up a Planescape box set they had left on the shelf. The Internet was just a baby back then.

Because of its past, D&D books out of print has the odor of death about it. With sales flagging, the line in disarray, this inflection point reached, and no real strategy for the future of the game proposed by Wizards of the Coast, it all begins to add up to a preponderance of suck. Dead Dungeons & Dragons is really bad for everyone, regardless of your preferred system. It's a gateway to role-playing, an iconic thread that holds together the hobby world, and for us, a good chunk of sales. Don't get me wrong, game stores can exist without D&D, and RPGs in general, but the loss of such an icon would be a tragic end of an era. Lets hope D&D has a future, a plan, and doesn't get mothballed by Hasbro. 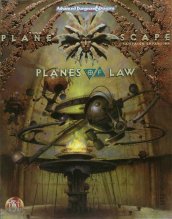 Drove 90 miles for this guy to finish up my Planescape collection
Posted by Gary Ray at Saturday, May 14, 2011