I bought a new car. For most people, that's no big deal. For me, it's kind of special. It has been seven years since I started the store, and for the most part, this has been a time of scrimping along, taking two steps forward and one step back. It has been a time of living in the shadow of my former socio-economic position, on the remnants of former middle class wealth and security. The old car was a reminder of that, as is everything else I have that's nice or premium, from Dwarven Forge to my leather jacket we bought in Rome.

A new car is also a way of saying I'm still here. I made it. The store made it. Others have fallen along the way. I can count at least half a dozen since I started, with the latest only six months ago. Rather than filming that video of me dancing in front of these closed store, an idiotic and childish gesture, a new car exemplifies that prosperity a little better.

A new car also says I'm aspirational, that I'm looking towards the future, that I know where I'll be in five years. Since we just signed a five year lease, it didn't seem unreasonable to assume I could afford a five year car loan. Having that additional cash for a payment was a combination of beating down expenses (the lease re-negotiation alone could cover the payment) and stronger sales.

And as for security, I feel more confident with the continued health and survival of the store than any job I ever had, which incidentally never lasted more than two years. And honestly, at a certain point you need to just live your life and stop worrying. I reached this point with my house this year. I would rather rent forever than spend another moment worrying about house values.

Speaking of being ashamed, scrimping, saving and cutting costs has been what I've done over the last few years to keep the business afloat. There is some survivors guilt in this purchase. Why did I make it while others didn't? How much of that is luck and how much is good planning? Am I living on borrowed time? I'm seven years into this. I've never been seven years into anything except my marriage, and that's no walk in the park either.

Then there are the legions of unemployed and underemployed customers. I feel for them. I emphasize with them daily. One told me about how he had his car re-possessed -- today. So buying a new car is something I generally don't talk about. I don't park in my usual space and I check the mail every day to see if my new license plates have arrived. Once the plates show up, the car is no longer new in my mind. There is a ton of guilt because I really do feel for them, look out for them and wish them success, as elusive as that has turned out to be. What I tell myself is I've made it this far and I don't need to apologize, but it's not really what I feel.

A new car also means I have interests, responsibilities and hobbies that transcend the store. I've got a new car ownership blog, since I like blogging and found a long term ownership blog key in my choice of cars. I don't have the money or the time to do anything crazy to the car, but I am enjoying the fruits of ownership with a new stereo system and some incredibly fun road trips. So buying a new car says I do other things too. That said, I definitely have a small business lifestyle that meshes business and my personal life inextricably in a 24-hour a day cycle. Like other people in that position, you take your enjoyment where you find it.

So to downplay this, yes, if you work really hard for seven years, you too can buy a new compact car with five years of payments. In that framework, perhaps it's no big deal. But man do I feel I've risen above when I put the key in the ignition. I have achieved non-failedness. Up ahead I can see success. 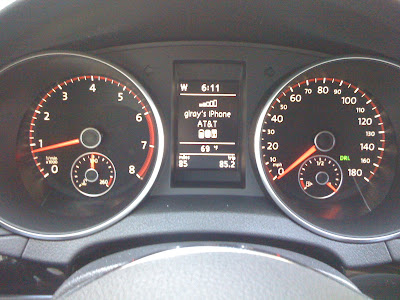