Here's the chart for Warhammer Fantasy Battles. It lacks the driving force of an iconic army that attracts new players to the game. Yeah, some armies are better than others, but when you think of this game, what army comes to mind?

Warhammer Fantasy Battles is our number seven most popular game. It outsells Dungeons & Dragons. It outsells Warmachine two to one. Yet, ask a regular in the store who exactly plays this game and they'll likely shrug their shoulders. It's a struggle to get organized play around this game, but it does happen. It's primarily for more "mature" gamers. They buy their stuff. They go home. They play. Old school. Amen. Anyway, that's how it works at our store. 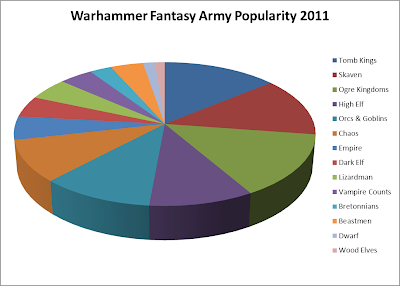