I'll be selling someone on Pathfinder, something I love to do because it's fun and easy, and I'll begin talking about adventure paths and the customer will cut me short. "Yeah, yeah, I write my own adventures." And that right there describes the problem with Dungeons & Dragons over the past decade and truly why Pathfinder excels.

Wizards of the Coast has never really put a lot of effort into adventures. They've been outsourced, written by the rookie, and generally delegated to low priority. With D20, it was far easier to let other companies write adventures, which are clearly the worst selling category of RPG product. You've got one guy in five who might buy it, and quite a few like the guy in my example, who never intend to. Partly this comes from the creative desire to make your own world, to get some skin in the game, but mostly it's because adventures suck.

So they suck, they sell poorly, and they're a necessary evil. However, what I've learned from Pathfinder is they're critical. Well written adventures, especially adventure paths are the glue that holds the hobby together. They keep me running or playing in games for years, long after we would have grown tired of that crummy  throw away adventure dumped on the wife of the core designer. They let me power through scheduling conflicts. They make people learn how to use Skype to get that one more player so they don't flame out during book four of their adventure path. They are a strong motivator to game on.

While I'm playing in these adventure paths, I'm buying accessories, additional rule books as they come out (there aren't that many, why not?), and generally telling everyone I know what a blast I'm having playing this game. It's better marketing than any poster or thing I hang from my game store ceiling that sets the burglar alarm off. They still don't sell that great from a store perspective, probably in the lowly 2 turns a year category for APs, versus a 1 for stand alone adventures, but they sell the hell out of everything else.

I'll also argue that that original guy who writes his own adventures is often writing them because of the suck involved, and not because of his desire to let his freak flag fly. There were once great adventures for Dungeons & Dragons, but you have to be a grognard to remember them. I'm reminded of this regularly when Wizards of the Coast sends out the coolest promotional adventures to reward their D&D Encounters DMs, like the one that arrived yesterday. 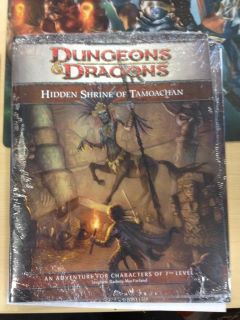 What ... the ... hell. My favorite adventure of all time is relegated to a secret handout to two guys. It's an adventure in which people will pay a small fortune for convention variant copies on Ebay. At the same time, I'm being given a steady stream of throw away adventures that nobody will buy. Should this not be reversed?  Is there some deep, dark, clever corporate plan that I'm missing? Kind of like the new Games Workshop marketing strategy of not telling anyone what they're doing? Please, explain.

Better yet, if you're going to have a D&D 4.5, or 5, or retro revival, please consider the lowly adventure. Please put someone brilliant to head that team and don't let the marketplace sort it out. Otherwise you'll be relying on these weekly "encounter" sessions to keep the game alive rather than, you know, actually selling stuff.