Yesterday I began putting Dungeons & Dragons 4 items on clearance. These things hadn't sold in a year and with D&D 5 about a year out, it was time. However, what this really meant was a removal of amnesty from inventory performance metrics.

I've got a few key principles for how I sell stuff, metrics on performance that inform what I stock and what I don't. In the case of some of our key games, the big ones I want to be known for, metrics are ignored in exchange for carrying the full line. It's not a long list: D&D, Pathfinder, 40K, and Magic. For these games, I will hunt down even the most obscure item to complete my collection. It satisfies the collector in me, even if it doesn't always make short term financial sense.

After the full line metric, I try to stock core. In some cases, like with 40K and Privateer Press games, the companies create their own "core" list. There used to be one for D&D and a lot of times you can infer a certain core from various games. I recently had good success with Reaper by using their best sellers list as a core. Fantasy Flight Games has a kind of core with their Media Center. If there's a video of the game, it should certainly get extra consideration.

With this metric, I represent. Yo. If you come to the store, you should see a good representation of that line, usually enough to satisfy most customers or inspire special orders. Stocking core is also the last refuge before more severe metrics are imposed. If you can't make it with core, maybe it's time to dump it.

The most important performance metric for me is turn rates. Turn rates measure inventory performance. While most big box stores require really high turn rates, like eight a year, I'm pretty happy with three to five. When turn rates fall, the usual response is to cut the slow sellers until your metric improves, hopefully without damaging the integrity of the line. For example, we recently dumped about half our Malifaux for the second time. The line continues to shrink and one day it will hit a tipping point where it clearly isn't a line any more and needs to go completely away.

Some games get a free pass to get me to "full line" status, like D&D or maybe a more obscure Settlers of Catan expansion. Core items also gets a free pass, which can be highly annoying sometimes. For example, I sell a Mines of Moria starter box from Games Workshop once every two years, yet I'm required to carry two at all times because it's considered core (reinforced with our partnership agreement). So yeah, a constant 4-year supply of Mines of Moria at all times. It's enough to make me want to, you know, find a way to sell it more often.

Where things get interesting (if these things interest you), is when a game jumps a metric category. For example, when Dungeons & Dragons is no longer considered full line and you move it to core, or focus on turn rates (what I'm doing now), there's a huge psychological shift in the customers mind, whether they recognize it or not. There's a whiff of death about it, perhaps a confirmation of doubt.

At the same time, moving a product line up the chain can have a positive effect. Measuring Reaper and Warmachine on a core strategy from a turn rate strategy helped breath a little life into the game, and customers were appreciative of the move. It had a psychological effect that the line was doing better. My customers were more willing to special order what I didn't have when they saw me focusing my attention on improving my selection. In fact, I mentioned recently in passing, that a store expansion might involve moving Warmachine and Hordes from core to full line, which got a couple people asking me about how that might come about (at the expense of Malifaux).

Finally,  I should mention that this is just what I do. Other retailers use other metrics (hopefully) or variations on these. When I had a much smaller store, sales per square feet became huge for me. Some store owners think turn rates and metrics take all the wonder out of their stores and have a more "seat of your pants" method. 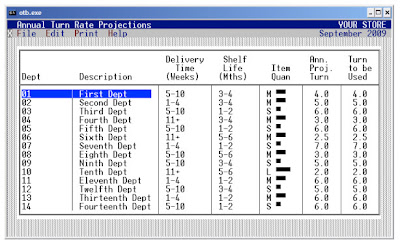