I've been waiting for the pageviews for the blog to hit 300,000 to talk about how it has changed over time. To put this in context, the LA Times had an article about how over a dozen of their blogs did a million page views in one month last year. This blog is obviously a small niche compared to mass media, but it does put my 5 years of blogging into perspective.

Total number of posts: 1,307.  Number of drafts that I thought would be better not posted: 44. As you may have noticed, the posts are less frequent over the years, which is mostly a factor of less time and more self-editing. Lately, I've thought about giving up blogging, as I regularly feel I have nothing left to say. As you can see, that feeling doesn't last long.

The most popular kinds of posts:
The least popular posts:
I try not to let popularity of post types influence me.

The biggest change in my writing has been the influence of Facebook, as I link every post to our store page. This means I'm more considerate of the audience, especially customers, whereas when nobody was reading the blog (at all), I was posting more about my hobby activities, journaling about any old thing, and was generally sloppy in my writing. I do a lot more editing now for both content and style. You can thank me later.

Some other milestones include hitting the 7,500 mark on purchase orders recently. That's how many orders I've put in at the store. I wrote my Purchasing Manifesto in 2009 after hitting 5,000 purchase orders. I stand by what I wrote there, but I'll add that my Open to Buy process has started breaking down under the weight of increased volume.

Last year I was $10,000 over budget on purchasing, mostly because of much higher sales volume that just overwhelmed me. That's $10k of taxable income that could have been profit or used for expansion needs. It's de-facto expansion when you're sloppy this way. It's lame, rookie, knucklehead stuff. I figured after this little problem that my Open to Buy spreadsheet was about 98% effective, which turns out to not be good enough. You wouldn't put up with 98% with your birth control and you definitely shouldn't in open-to-buy. I really need a software package or checksum in my process. For example, a monthly inventory total count that adjusts OTB.

Other goals include a sales goal that I've plucked from the sky. I want to one day do a million dollars in sales at our location. We're years away, but I think it's important to have a plan. I believe it to be fully attainable and the plan includes first expanding our space (this Summer) and then our inventory. This is instead of a second store, the thought of which makes me delve into franchise listings of more reasonable businesses. The horror.

It sounds really strange to say that goal out loud, but why not? It sounds big if you're not in retail, but with a 5% net profit margin on a business of this type, it's like saying I one day would like a job earning $50,000/year. Wooptido. My last IT job earned twice that.

It's especially strange after writing a blog post of the coming Star Trekian apocalypse of the death of sellable things. So it's either a million dollar store or matter replicators, apparently. 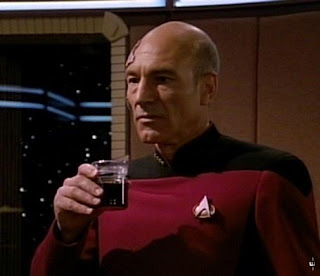