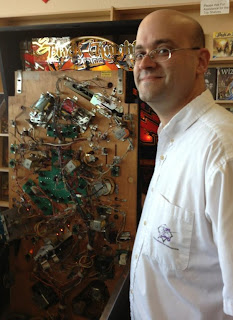 Pinball machines are cool in a kind of steampunky way. In a world of computers, video games, and endless binary processes, pinball machines, the later models, are digital-analog hybrids. Even when full of a cabinet of circuit boards, pinball machines come down to some electro-mechanical gizmos, springs, coils, plungers, magnets and various subjective analog bits that makes every pinball machine a little different, and every machine different over time. They're more art than science, as our repair guy explained.

I was reminded of this when we replaced some parts this week. Most of the replaced parts weren't new, they were just better. Imagine replacing an identical part on a computer with an identical better part. Completely unheard of. The company that makes our pinball machine, Williams, closed their pinball division in 1999, so my parts options on a 23 year old pinball machine are generally: used, re-manufactured, or home-made. So we replaced a bunch of parts, and like an auto mechanic, scheduled others on the "next time" sheet.

Despite the parts issue, I'm told there are more parts now than ever before. This is true even though our machine, my favorite from when I was young, was one of only five thousand or so made (pinball geeks keep track of, and argue constantly about, all this stuff). During our service, our pinball repair guy was quietly swearing up a storm about a substandard home-made piece he found in our machine but then went out to his truck to get some sheet metal to create his own part. There's home-made and then there's home-made.

While trying to wrap my head around why the machine fits so well in the store, it occurred to me that the role-playing games I enjoy have a lot in common with these pinball machines. They've got a solid system behind them (the upper cabinet), a kind of science of the imagination, but the implementation is analog and pure art (the lower cabinet). There may be a cabinet of printed circuit boards up top, but every tap of the flippers makes visible sparks in the lower cabinet. It's a fine balance that can collapse if either element is out of whack.

I see the argument about various editions of Dungeons & Dragons to be mostly about this. I'm referring to when an edition appears to have too much science and not enough art (newer editions), or horrors, too much art and not enough science (older editions). Why does the druid, and the druid alone, have to fight his superiors in hand to hand combat? Because Gary Gygax said so (art over science). When does a 4th Edition spell do more than the spells description? Only when the GM rules as such (science over art).

This is something you don't see much of in more objective games. Board gamers, my wife included, find RPGs ridiculous because of the interpretive dance of the game. CCGs tend to attract those who enjoy the complex cascade of rules and procedures. Miniature games have tended to walk a fine line, with many so maddeningly complex that even their designers can't agree on the rules. Complexity is their nod to art. Others work for intense clarity, only to wonder why they've failed to capture the imagination. But the game is better, they cry, as if better was objective criteria. There just weren't enough springs and coils firing off in the brain. 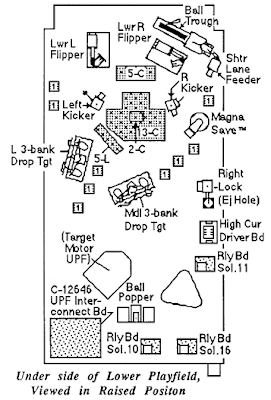