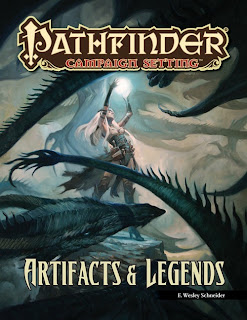 Artifacts & Legends comes on the heels of Ultimate Equipment, an enormous catalog of items, magical and mundane, a treasure trove for both player's and game masters. I mention this because the in-store discussion I have of Artifacts & Legends is that it must be a book of high level magic items, and that the customer neither uses nor needs such a power gaming nightmare. However, Artifacts & Legends is much more than that, it's a valuable campaign source book, ideal for brain storming.

Sure, there are indeed artifacts, with statistics that could be handed out like candy to high level adventurers, but the book spends some time dissuading you from such an error, as well as the mistake of using them as simple McGuffins for adventures. What sets Artifacts & Legends aside from every other treatment of artifacts, pretty much ever, is that it offers guidance on how such an incredibly powerful magic item could be used within a campaign, or better yet, how a campaign could be build around one.

Each artifact contains a section on history and ramifications. History provides the context of how the artifact was used (and often abused). Ramification provides your kernel of an idea (or ideas) on how to leverage that history in your campaign to build around it. These items are so big, with such a historic footprint, my own advice would be to start a campaign from scratch surrounding an artifact.

As artifacts, these items are often beyond the magic system, with enormous powers, often unexplained. An entire city in a five mile radius may simply vanish. Imagine coming across it on the road. Imagine it's your town as your adventuring party is on its way back from the dungeon. Or, imagine as the party approaches their home village, they discover everyone missing, except the village drunk in the town square stockade who jabbers on about screaming people floating up into the sky ... except for one peculiar man in black... with a strange book. Sneaking into the arcane library in the big city, the party realizes they're mixed up in machinations surrounding The Codex of the Infinite Planes.

There are no game rules provided for many of the artifacts powers, and this stuff just happens as a side effect of messing with an artifact. The results are wide ranging. Organizations are set in motion to steal or recover the artifact. Bad guys, good guys and the party are in pursuit. Powers across the planes sit up and take notice, sending their avatars and agents to investigate. More than likely, a series of adventures is set in motion to research, discover, counter, recover and perhaps even destroy the dangerous artifact. Destruction of an artifact can be a campaign in itself as we know from a troublesome ring discovered by a halfling.

Because these artifacts are relatively system neutral, as their power level is beyond the rule system, Artifacts & Legends is a useful book for any fantasy role-playing game. There's no reason it couldn't be used for any version of D&D, Dungeon Crawl Classics RPG or your favorite high fantasy system.The scaffolding is all there.

The book essentially has two types of items mixed within the categories of legendary and lesser artifact. Adventure path artifacts cover about a quarter of the items, and non-AP items comprise the rest. The adventure path artifacts are big on exposition and short on utility. It's fascinating to read about the Runelords and their Seven-like indulgences imbued into their corrupting artifacts, but that stuff isn't going to make it into my campaign. The AP items aren't separated, so often I'll be reading and realize the level of detail is far greater than the previous artifact, look at the index, realize it's an AP item, and just sit back for a good story. Since quite a few Pathfinder GMs I knew will only ever run an adventure path, this is going to be useful for them. For the rest of us, use them as an example of how a more generic implementation might eventually unfold in your campaign.

My only minor criticism of the book is internal inconsistency. Artifacts are all one-off items, so descriptions can range from as little as a page to up to four for the Dancing Hut of Baba Yaga. Sometimes I was left wanting more with the shorter entries, especially more of the ramifications section, as I still wasn't quite sure what to do with the thing. Other times I was left with the impression that I really need to go hunt down the original source material, such as any time I hear about the cool stuff going on in Rise of the Runelords. Overall though, I was mostly just glad my own campaign was already in motion, or Artifacts & Legends would have thrown me into idea overflow.

Artifacts & Legends, by F. Wesley Schneider, is $19.99 and in stock at Black Diamond Games, of course.