Are you Gamer Geek Enough?

White Dwarf had an interesting article a couple years ago about how people engage with their miniatures hobby. Some paint, some model, some play the game, some just like to read the stories. There's overlap, but we all have our way of engaging with our hobby. That method of engagement is determined by interest, time available, and the period we are in life. I mention this because of the ongoing geek challenge of whether someone or another is geek enough, gamer enough. The judgment is continual, harmful, and quite unnecessary.

Like most realms of geekery, gamers constantly engage in the authenticity debate. They wish to weed out posers, put others on pedestals and place themselves somewhere in the hierarchy in their mind. Geekery was hard won for older gamers, unlike nowadays, where learning and engaging requires time and an Internet connection. Regardless, geekery comes with yardsticks for measuring and tests of purity. Perhaps it's the ease of information that makes people grasp so hard at their hard earned geekery. You can't just know it, you must own it. You have to have a take.

If you're focused on one game or type of game, you lament your lack of well rounded geekery. If you flit from one game to another, you wish you could focus in depth on just one thing. I had that exact conversation a few years back with another game store owner. Me, wishing I had more time and interest in more games; him, wishing he could focus on one thing as I did. And me again, wishing I could go farther, deeper. Even right now, I'm not sure I'm worthy to talk about these things.

There's a love for games, so there's a desire to do it all, but there's also the darker, underlying, nebulous worthiness that we're all trying to live up to. As if we're caretakers of a precious treasure that requires a higher calling, a stronger dedication to The Cause. So many games, but only one lifetime? So unfair.

Criticism is one way we see gamers flaunt their stuff. The daily conversations I have about minutiae, such as art in role-playing books, or the purity of dice with rounded corners, is exasperating. Nobody is getting rich on these games. Many of these games are produced by a guy who does it because he loves it. It's time taken from his friends and kids and his lonely dog. You're going to bust his balls over one piece of artwork, or a feat in a book of feats? Or a miniature pose? Really, a pose? I've seen people denounce entire games because of one card.

Add on that the moaning of the height of the prices and it's a bit too much to bear sometimes. Do you think guys go to sporting goods stores and moan about the price of golf clubs or skis?  Does this happen? It's part of the uneasiness of the lifestyle justification. I know I'm buying a $60 box of army men or a book on how to make my imaginary wizard more powerful, but I just want you to know I'm on to your scam to satisfy my needs. I see what you did there. I am a discerning individual, now hand me six shiny packs and that unicorn deck box; pronto mister.

Nowadays, gamer culture has gone so mainstream that you can arrange your life completely and exclusively within it. You've got conventions and shows of not just games but celebrations of pop culture and costuming. The pervasive Internet contains every conceivable interest, and everyone with that interest available for you to follow and interact with. If you choose where you live, you can even have fantastic game stores and game communities. I moved to the Bay Area for similar reasons. In this modern cocoon of personal interest, you might never leave the confines of gamerness, never have to hold a conversation with those who don't hold your interests. It's probably at the expense of the larger community, the country at large, but that's another debate. This is a bit unusual for those of us who grew up pre-Internet.

Back in the day.... here we go ... geekness was hard earned, it required finding odd zines or cork board notices where you would send away for your next bit of potentially interesting geekery, dollar bills hidden in first class envelopes or money orders issued by the many locally owned banks found on every corner. It was a crap shoot. Often things didn't come, or they came in battered boxes from foreign countries that were so intriguing that your family would gather round the kitchen table while you opened your exotic package. Perhaps it's how you started collecting stamps. Remember stamps?

Or perhaps you found your gamer goodness in a store, like the cookware store I rode my bike to (without a helmet) that had a corner of forbidden lore because the owners son played Dungeons & Dragons. The smell of a cookware store still floods back memories of those wonder years. They should make incense with that smell.

You would take your forbidden lore to school to show your friends, but secretly, not because your teacher would confiscate it, like today with fistfights over Yugioh cards, but because that guy who shook you down for your lunch money might beat the crap out of you, for being you. Geekery took some guts. Meanwhile, we  still had little league practice, learned musical instruments, and went on dates (I'm told). Geekery was smaller, I think, a closet interest, rather than a lifestyle choice as it tends to be viewed today.

My point is, it's all good. We engage at the level we can, like all things in life. We're hardest on ourselves, but we needn't be. We definitely don't need to judge others in this area. We need more hobby gamer geeks, not fewer. The herd is no longer big enough for such indiscriminate culling. Give yourself and everyone else a break (but especially yourself) and enjoy your geekery without so much judgment. As we move into game convention season, let the old guy talk about how his first hobby board game came in a plastic bag (Car Wars), or how it took him five years to get his fighter to 10th level (Jerlea the Third -- don't ask about the first and second). Be thankful for the rich geek culture we live in today. Geeks have won, and you are gamer geek enough. 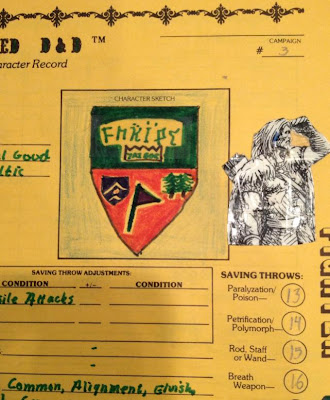