Friendship is Magic: The Gathering

Why aren't there any games that don't involve fighting? Why can't we have a game of peaceful conflict resolution? Well, there is one, or there will be as of next Friday. Black Diamond Games was one of 16 stores chosen to host the My Little Pony Collectible Card Game pre-release.

This was very low key, something I asked my event staff to sign up for over an email. I think I got at least two "Are you sure?" responses before they did it. A couple people called the store to express extremely strong interest in coming, which is how it even got on my radar earlier in the week. Then, bam!

About ten boxes showed up, containing a jumble of event product and unusually generous prize support, such as enough t-shirts that we had to spend time sorting by size. Enterplay called an hour later to inform us that their Evite for our event was showing 55 confirmed attendees and about a dozen maybes. "Uh huh," I told them. "We'll see." Either they were mad, sending us enough product for 160 people, or they were tapping into something way bigger than I could imagine. It was my lack of imagination that was confirmed this morning.

116 people have purchased the pre-release kit so far, and we're still going today. They've also gone through boxes of MLP dog tags, fun packs, and even purchased one of the MLP Monopoly that we stock. I have never seen this before, a collectible game, out of the gates, completely on fire. Granted, our exclusivity in getting the event was probably a large part of this, but I've worked through some real duds, and this is not one.

So before you make your Brony joke, know a couple things. This is a real, non-violent card game played by solid individuals who are willing to buy in to have fun. Don't be a mean, meanie pants. Friendship is indeed Magic.* 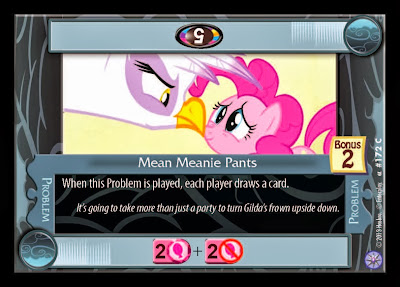 * The real question, the key question: Is it any good?
Posted by Gary Ray at Saturday, December 07, 2013