A big part of our expansion Kickstarter (currently a bit behind in funding at around $10,000) is producing unique gaming products for our supporters. The project I've been assigned to handle is tentatively called The Pit, a Pathfinder adventure by Amber Scott. I went over how it developed in my last post.

There are an enormous number of unpublished Pathfinder adventures floating around out there that we could have picked from the ether, but we wanted something special. The trick was to come up with a solid adventure that also had an experienced writer at the helm, along with a theme that tied in with the store (however loosely).

I will admit we contacted several veteran authors first. As you might expect, these authors are booked out for months, which is great for them, but it was impossible to get a commitment for this project, which is tentative at best. They, Wolfgang Bauer in particular, led us to the up and coming writers, and the one that stuck out for me was Amber Scott. I enjoy her writing and jumped at the chance.

There are a number of moving pieces in such a project with various costs. Experienced authors, if you can find out (it took me weeks) get between 7-12 cents a word. If we were going with one of those no name, off the shelf adventures, floating around, it would be somewhere in the 3-5 cent range, with some new authors getting paid as little as a penny a word. Here's a good article on how little authors are actually making. You should really cut them an enormous amount of slack. 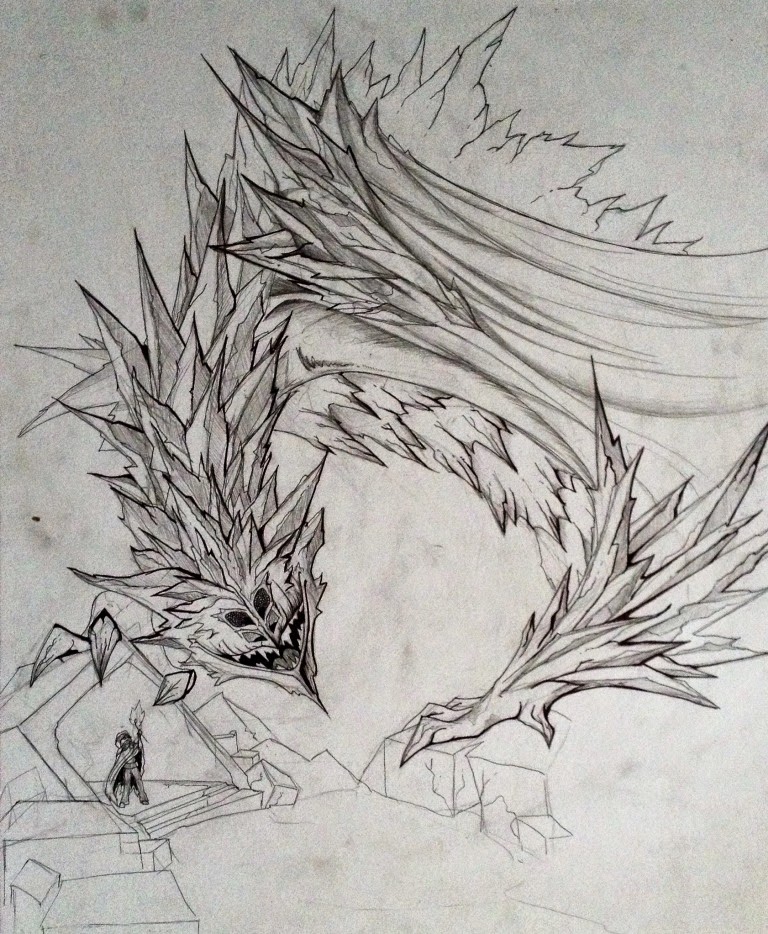 After the author, there's artwork. Our cover art is still in progress, but it will cost in the $300-500 range. I'm including an initial sketch of the cover here. We'll have some smaller, internal graphics to break up the text as well. As you know, we don't actually pull the trigger on completion of any of this stuff until the Kickstarter is successfully finished, so we start with sketches and move forward once the Kickstarter is successfully over.

Besides artwork, there's about an equal amount of money to be spent on maps. My overland map I posted in my last update, was one I had commissioned a while back, and will certainly be in the final product. That map alone, created by Ben Monroe, took dozens of hours to conceive and produce. There is a dungeon, of course, which makes up the bulk of the map budget, but that gets done towards the end.

Finally, a layout person will need to make it into a respectable product, with proper formatting, tables, and the like. This will not be a PDF ripped from Microsoft Word, but should look the part of a professional adventure. As I mentioned before, I'm tempted to formally publish it and sell it in the store, but this will be strictly reserved for our Kickstarter supporters.

Thankfully, Amber is managing this project for us, as I certainly don't have the contacts or skills. All said and done, you can figure this adventure will cost a few thousand dollars to produce. So although we're digital pan handling for your contribution, there are some considerable costs associated with our project, an investment that will hopefully entice not only our customers to help us out, but those who might just want a cool Pathfinder adventure that had a huge amount of love added to its labor.

And now for something completely different.

I wanted to write a narrative derived my home version of this adventure. I know it's a bit like telling someone about your character, but you might find it interesting if you're interested in this adventure.

Getting to The Pit, the salt mine the PCs are planning to explore, requires skirting through Silent Stalker territory:

Smoke Talker crept silently along the shadowed Valley of Pillars. The craggy cliffs were both his protection and a curse, infested with foul harpies likely to pluck him up at any moment and dash him against the pillars for amusement or dinner. As with all members of his tribe, he had learned to feel tremors in the ground with his feet, a boon against the armored land sharks that prowl underground. That let him focus his eyes on the sky, scanning for his winged enemies.

He heard nothing. As with all in the Silent Stalker tribe, Smoke Talker had his eardrums perforated at birth. While outsiders found this barbaric, there was no other way to survive the call of the harpies in the vast badlands. Even now, as he hunted for slaves with his men, it was unlikely he would find many survivors this close to the cliffs. Most are snatched up by the harpies before finding their way into the Valley of Pillars, along with the unfortunate who sail too close to shore. The smart ones use ropes to tie themselves in, although even that is no guarantee of survival, based on the torn corpses with trailing lines he often came across. It was the villages main source of rope in the barren badlands.

The real cruelty was not from the harpies, who he vaguely understood as creatures of prey. No, real cruelty took the form of  He Who Waits, the maruf genie who insisted the village of Khu Sim Sim collect slaves for his palace, in some far off land. The giant brute appeared in the standing stones each moon and took his prisoners. Smoke Talker was assured such slaves lived lives of luxury, an existence far easier than with his own tribe, who would sacrifice one of their own if a captive was not forthcoming. That life of luxury is what kept his men from despairing at such a despicable act and allowed their loved ones to be taken off when they failed to bring a captive. The more naive tribesmen had to be kept from mistreating their captives, out of a sense of jealousy over their better lot.

One day Smoke Talker fantasized, one of his men would defeat the maruf in combat and free the village. Occasionally, challengers emerged, but it had been a long time. Maybe one of the boys from the next generation.
Posted by Gary Ray at Monday, June 02, 2014