Our expansion Kickstarter funded Monday night! We raised $28,493 from 224 backers. We will net about $19K when it's all done. I can now focus on the store again, after 60 days of digital pan handling. That's the amount of time the entire staff focused on this project, time taken away from core store issues. Most stores, including ours up until a couple years ago, are not on a program of constant improvement. When we take a long break from that, I can feel it.

The potential failure of the Kickstarter weighed heavily in this regard, a massive distraction from the core business mixed with potential "brand erosion" as we hit up our customers for money with no guarantee of success. Brand value and brand erosion were real factors in this Kickstarter. You can read about it in this article about our project, by Scott Thorne. I should also mention we have a great deal of respect and gratitude for our customers, including those who didn't pledge. You are still our focus, something this sideshow distracted us from.

The project was expensive. There were $6,000 in sunk Kickstarter costs and $10,000 spent on exploring the construction, a project ongoing since last Summer. Failure meant we had lost $16,000, some of that debt. By succeeding, hopefully the distraction will be forgiven when we launch our new event space. The money will sort itself out too. For a while, I was considering how to disengage from this project, selling my car to get out from under the construction loan if the Kickstarter hadn't worked. Thankfully I'll be keeping my car.

While in the Kickstarter doldrums, I pitched a new business plan to a good friend and business partner of mine. With much love and care, he told me to stop, talking me off the ledge and putting me on the path of fund raising. While most Kickstarters are Internet based and use that medium to raise funds, we had backers I knew, with phone numbers, and existing relationships. The active fund raising resuscitated the project and changed my attitude. When my friend pointed out that fund raising was inherently political, it all started to make sense. The Kickstarter, personally, was a re-election campaign.

Nine backers pledged at the Game Store Rescue: Blog level. Once the funds are reconciled, I'll be contacting those nine people to figure out what they want me to write about. When I've asked people to submit topics in the past, I usually get wildly interesting ideas, both specific and general. I look forward to this.

We also sold all five of our Game Store Rescue: Remote Consultant tiers, along with one On Site pledge. I'm looking forward to helping those stores and the insights I'll gain from the experience. You'll also see some game stores listed on our Order of Knighthood wall as well, when that's up, including on of my favorites, Gamescape North.

A good number of publishers will be up there, including our largest donor, Paizo (Pathfinder RPG). I owe Lisa Stevens and Erik Mona a special thanks for their support. Atlas Games was a big contributor. Wolfgang Bauer at Kobold Press, was essential in helping hunt down an author for our Pathfinder adventure. Amber Scott is busy writing Into the Pit right now. Gabriel Vega's Pacificon had a clever matching fund marketing program.

As a blog side note, we hit 1,000,000 page views this week, a number I've watched creep up for years. It's meaningless really. Nowadays, page views are primarily spam based, which is unfortunate. I removed the "top posts" link, since it had become largely irrelevant. 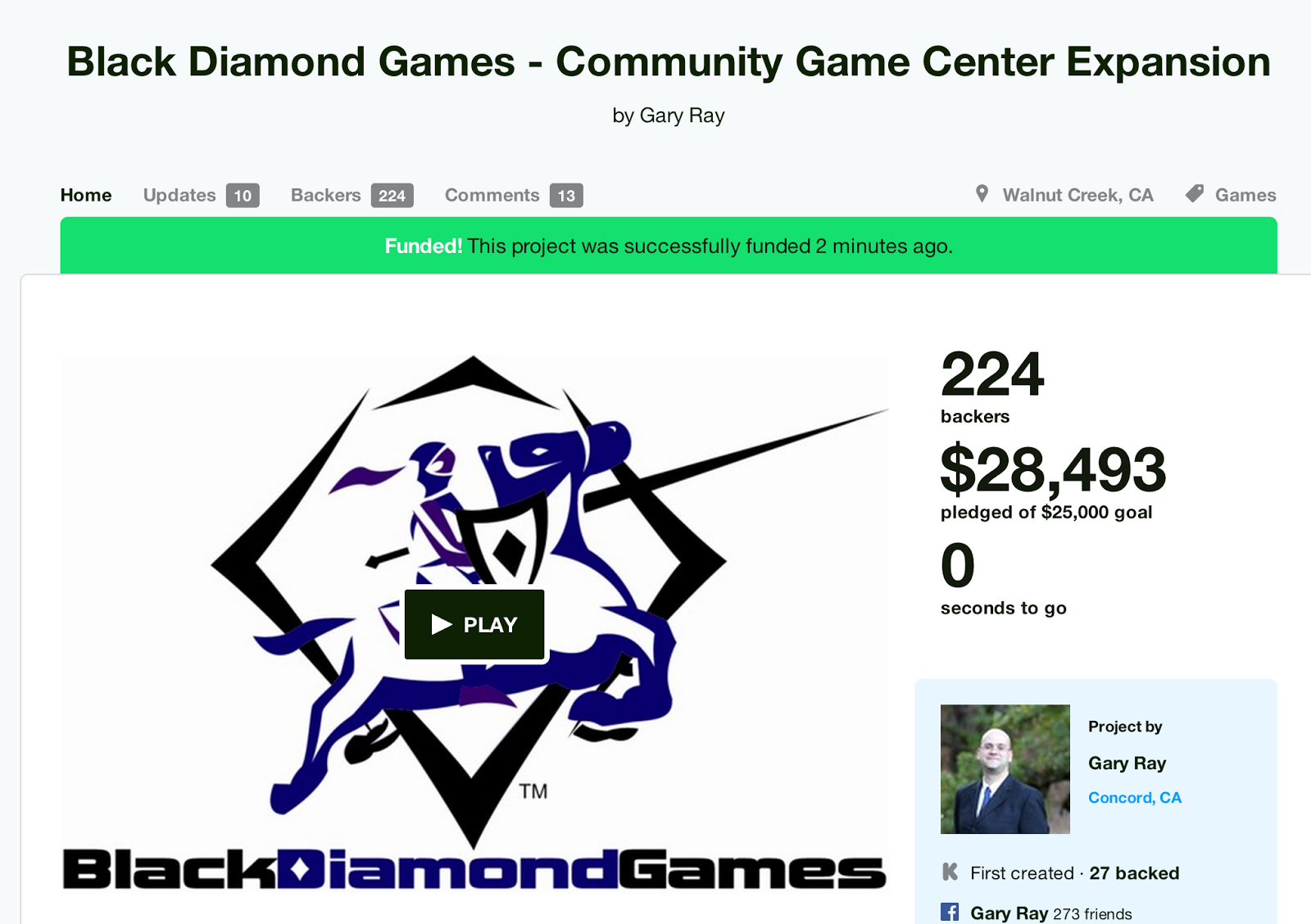