Shortly after I opened my store, nearly ten years ago, a teenaged Michael Parker came in and told me he was doing a report on the game trade and wondered if he could interview me. I thought that was a bit odd, but why not? Fast forward three years and that same kid, now an adult, offered to help me move the store to our new location. He was so organized, logical and forward thinking, that I made him employee one at the new store.

As I brainstormed ideas with Michael, trying to wrap my head around our larger venue and the enormous logistical task of event planning, it was clear he was ready to handle more responsibilities and tasks I didn't want. I made him my manager and event coordinator, a job he completed yesterday after seven years.

What I am losing is a partner. Michael knew my mission objectives, my strategy and intent, and could translate that down to tactical, in the field, ideas and actions. In other words, he could read my mind. I didn't ask him to do this, it's what he does. As I watched him go through college, getting a business management degree, I got to see him deploy increasingly sophisticated tools to our problems, helping make tough decisions and cutting to the heart of the business case of various issues. That incisiveness was not only helpful in knowing what to do, but more often in knowing what not to do.

Personally, having him on staff meant I could avoid burn out and have some semblance of a normal life. With a family, that's especially important. I was able to start taking weekends off, something nearly unheard of in retail small business. The goal was and still is to be dispensable in the business, for me not to be needed, and Michael helped develop the various processes that allow others to run the store as well as us. A good small business is all about processes, while still maintaining high levels of customer service.

Michael held the line, made tough decisions, bucked stupid game trade trends, developed better ones that we deployed, some of which are used across the country now, and took blame, when he was told to push it up to me. If you had a problem with Michael, you were probably wrong. At least as it pertained to the businesses best interests. He is such an integral part of the success of Black Diamond Games, and it is a success, it's unclear what exactly will happen with him gone, where the Parker ends and the BDG begins.

Besides having freakish encyclopedic knowledge of nearly all things games, his Ipod perpetually playing gaming podcasts even when you're trying to talk to him, Michael was a good friend.  That is almost a necessity in small business where wrestling your personal life from your business life can be an enormous struggle.

As much as I wanted him to stay, he needed new game trade challenges, not retail. He knows retail and was smart enough to move on. He gave me something like two years notice that he planned to leave, which gave us time to groom people to fill his role, not that it was a realistic possibility. He'll be working as a buyer with ACD Distribution, my main distributor, and a part of my business family. I'm very happy for him and I'll take the credit for forwarding Michael the job opening. Even though he's moving to Wisconsin, with Michael at ACD, it won't feel nearly so far away. 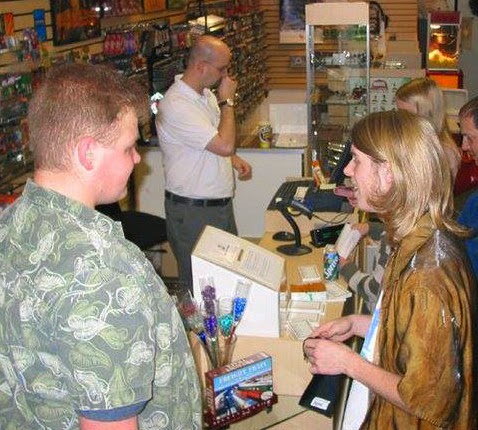