D&D and the Three Pee Pee

This is a chart of our RPG sales over the last year. Dungeons & Dragons 5 and Pathfinder are neck and neck. Add in the 3PP (Third Party Publishers) and ... it's still neck and neck. Those 3PP are the interesting bit. They had no significant role in our store before D&D 5. We stocked some Pathfinder compatible items, but honestly, Paizo is so prolific, Pathfinder 3PP materials were pretty much ignored unless it was a special niche (psionics, for example). I have so much unread Pathfinder guilt, it's crushing.

What's interesting with D&D 5 is the return of Third Party Publishers. Frog God Games has made it into our top ten with their D&D 5 and Pathfinder compatible products. Really, it's about their D&D 5, especially Fifth Edition Foes, an excellent monster book that's D&D 5 compatible. Their similar Pathfinder books sell far fewer copies than nearly identical D&D 5 books. But what about the D20 glut, you ask? Isn't third party publishing for D&D dead?

As long as Wizards of the Coast keeps people hungry for new content with their trickle release schedule with D&D 5, The Stable IP Edition, there will be demand for 5E content. Coming in at #9 is Gale Force Nine with their D&D 5 spell cards (which would be higher with a steady supply), and Goodman Games at #19 with their D&D 5 adventures.

Adventures never sell well, so no surprise there.  Figure one in five players (the DM) could potentially buy a published adventure and only half of them actually do (10% of the market).

Licensing (or lack thereof) is a whole other discussion. GF9 sells licensed D&D products, while the others do not.

Note "Other" in the third position. D&D, Pathfinder, and compatible lines may be 70% of sales, but we carry about 25 additional brands in the Other category, for about 45 total "lines." A line can be a single book, so this can include a lot of things. 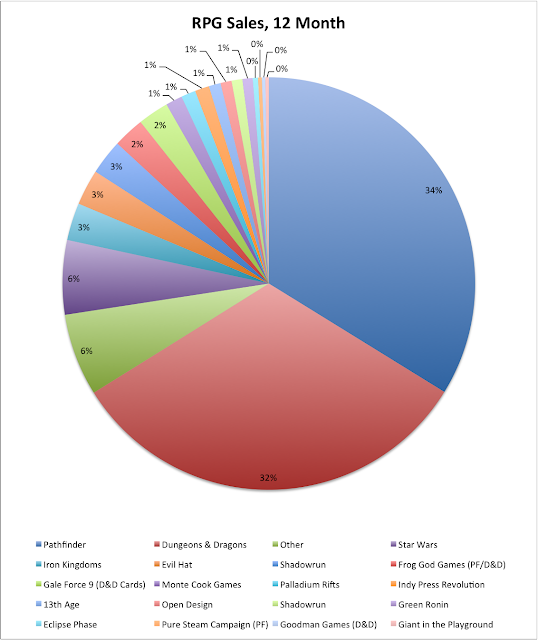