BIG STEP BACK
I started this post saying "I am not a lawyer." This is a dead give away that I'm about to step into dangerous territory. That and "You people" are never good ways to start a sentence.

The premise of this post is that volunteers are clearly employees/independent contractors of some sort, according to the law. This clarity does not actually exist, legally, if you talk to attorneys, which I have, since posting this. It doesn't mean volunteers aren't one of these classifications, only that the legal advice is not to worry about it. The law is unclear, convoluted or it may just mean your likelihood of ending up in court with such a case is very low.

You people take that in mind if you're reading this article for the first time. I am not a lawyer.

I am not a lawyer, but lets take a shot at the current controversy. Michael Bahr needs to write a blog piece, since he is a store owner with a law degree (but, he'll point out, is not your attorney and has no legal advice for you).

There's a lawsuit against Wizards of the Coast (WOTC) from four Magic judges claiming Magic judges are employees. As WOTC does not properly compensate judges like employees, including not paying them wages and other benefits, the lawsuit asks for back pay and other damages. It's no surprise WOTC strongly disagrees with the claims in this suit. However, when you look at the legal definitions of volunteer, be it in strict California, where this suit was brought, or federal, it's clear Magic judges certainly don't fit the volunteer bill.

We don't need to go far to disqualify Magic judges as volunteers, all we need is the first requirement under the Department of Labor. Volunteers can't work for for-profit companies. Done. Oh, did you think calling your game store folks "volunteers" was somehow legal? Well, it's not, and I'll get back to that.

Now that we understand they're not volunteers, we then have two questions:

They certainly act more like independent contractors, rather than employees, at least when they work for game stores. However, Wizards of the Coast has a large number of requirements on hours worked, locations required for judging, judge certification, and work requirements. They exert strict discipline on judges, which some believe is why this lawsuit was brought in the first place.

WOTC also compensates judges with thousands of dollars of promotional items and free product. Because of all these work requirements and tangible compensation, WOTC may have stepped into a de facto employer relationship. Again, just because I use terms like de facto, I am still not a lawyer. However, as a layman, it's clear the more control you have over a worker, the stronger you move away from independent contractor towards employee. Magic judges don't have much independence, when it comes to how they do their job. Again, they're not volunteers by DOL definition, so judges are one of the two employment definitions.

How much liability does this open up to hobby game stores? The answer is a tremendous amount, if you're relying on "volunteers," which I've used in quotes, written or in the air, for some time now.  If you're not paying and issuing 1099's or putting all your "volunteers" on staff as employees, you're breaking the law. There is no gray area. We don't need this lawsuit to know this. Now, the biggest judge issue for any store, by sheer volume, will be Magic judges, and WOTC impedes a stores ability to hire them.

Training an employee to be an L1 judge is easy, provided your L2 or higher judge anoints them. However, to get beyond that level, WOTC has a host of requirements, including working at other stores. That, and several other requirements are a problem for me, as my employee. So I personally see the structure of the judge program keeping stores from properly hiring any level of Magic judge. It's a separate issue, but I would argue, if this lawsuit came back my direction, that WOTC is the one you want to talk to first, as their de facto employee (that term again) and then we can talk 1099's for any judges willing to take one (many won't, due to hard and soft WOTC related requirements and compensations, which is why there's restraint).

The fallout for game stores from this lawsuit could be a significant barrier to entry, once store owners realize the gray area is not actually gray at all, but quite black and white. This is the biggest of the dirty secrets about the game trade, the "volunteer" issue. I recall sitting in a Gama Trade Show seminar last month where the "volunteer" air quotes were flying so fast, they could have put an eye out. Please, spare me. The second dirty secret is the improper use of retail space for assembly purposes, and all that entails. Notice how I get more vocal on that as my assembly zoned construction project gets closer to completion.

Some stores already 1099 volunteers or employ them, so they're ahead of the curve. What we need is a wider understanding and, I hate to say it, wider enforcement. As we see higher minimum wages, higher workers comp costs, and the elimination of "volunteers," we're likely to see two tiers of stores. One store will toe the line, while the other, like we have now, will continue to skirt the law, pay their staff in peanut butter sandwiches and Magic packs, and skim their sales tax receipts. So if there's an upside to a game changing lawsuit, hopefully it's a more even playing field. 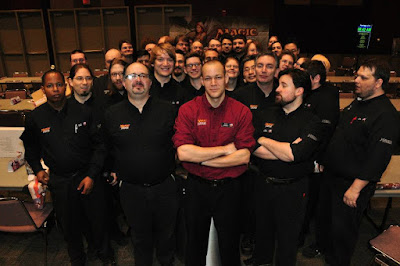 Did I mention the uniforms?
Posted by Gary Ray at Thursday, April 21, 2016