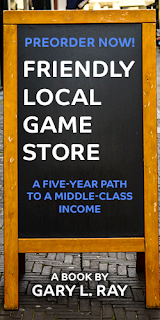 Almost a year ago to the day, I announced my intention to write a book. It was naive in its early concept, but we eventually got it done. Today it went live for pre-order. You can order it now for delivery in March (or pick up at the GAMA Trade Show). Electronic only versions, Amazon editions and game trade options will arrive later in May, but if you want a physical copy, it's hard to beat the pre-order deal with free digital content.

When I wrote that post a year ago, I expected the book to be a collection of blog posts interspersed with personal narrative. It turned out to be a whole lot more. Blog posts make terrible book chapters, it turned out. I didn't know exactly how terrible they were until I saw them in a Word document, puny and insubstantial. A blog post is supposed to be pithy and to the point, with a lot of assumed knowledge and at best a nugget of a concept. When I tried to turn those posts into chapters, it wasn't just about expanding a post, it was a full re-write.

Chapters need themes with supporting concepts hanging off them. They can't assume the reader is "in the know." I can't put "Tradecraft" at the beginning of a chapter and pretend everyone knows what I'm talking about. Having an editor who wasn't a retailer also meant I couldn't get away with anything. All my concepts needed to be explained and the math crunched. That turned out to be a very good thing. The book shines because of my editor and is polished to a brilliant sheen due to my industry outsider, proof readers, who took issue with my business slang and occasional mean spirited discourse.

The obvious question if you read this blog is should I buy the book? I would say the book is inspired by the blog, but it's not a collection of old stuff or even re-worked stuff. It's about 80% new content and the other 20% has been worked over to be much better than the original content. So yes, please buy the book. You won't feel cheated after being a loyal blog reader.

The book has two concepts in one. The first concept is how to build a profitable game store. There are many ways to build a game store and even several that work. Writing this book was an exercise in best practises. It's one thing for me to say what I would do in a blog, but it's quite another to distill a concept down to what I truly believe will work for my readers, folks who may have hundreds of thousands of dollars on the line.

The premise for this build is getting the owner to a middle class income in five years. That income is roughly $55K a year, a number that might seem overly ambitious to an existing store owner, but is the median household income in this country. So some people will think I'm insane to shoot for such a high income, while professionals will laugh that I'm essentially aiming for the middle. Who invests six figures and five years of their life to aim for ... the middle??? That sums up the game trade pretty well. Working our darnedest to achieve the middle.

The second concept of the book is a personal narrative. I wrote a book that I wanted to read, which is not a book about building a game store. As an established retailer, retailing books bore me. I read them anyway, but oh man are they tedious. So the second part of this book, interspersed with the how-to,  is my story. It's a narrative of all my mistakes and victories that roughly corresponds with the how-to chapters. Every store owner has singular reasons why they succeeded along with unique failures. It was glorious to write a chapter on how I think you should run your business and then tell stories of how I completely screwed up that area when I tried to do it. If you find my how-to stuff preachy, feel free to skip it for the much more fun narrative.

The narrative also goes over what was happening in my life during the 14 years of owning a store. There were major illnesses that almost ended my marriage, a new child was born, and I almost lost my house, but turned that defeat into my greatest victory. My attitude had to change over this period, as there was too much on the line. I think you'll get to know me in this book, which is a little scary.

Thanks again for reading this blog. If you look back far enough, you'll see I had no great plans for this thing. You can find my 40K army lists and photos of my Dungeons & Dragons games. You'll find grand pronouncements of how to do something then descriptions of terrible failure that contradict what I said. I've enjoyed writing it and plan to continue. I hope you enjoy the book as much as I enjoyed writing it. Please let me know what you think of it.
Posted by Gary Ray at Tuesday, February 13, 2018