This is our third public report to stakeholders of Black Diamond Games, Ltd. It provides insight into how we do business at our one store. Being in a suburb of a metro area surrounded by hundreds of thousands of people, in the prosperous San Francisco Bay Area, our way is just one way. Unlike many smaller markets, it's possible for us to see strong growth for decades, without resorting to opening multiple stores. It's a relatively prosperous area with customers far less price conscious compared to other areas of the country.

Overview
A stakeholder includes employees, event coordinators, shareholders, distributors, publishers, private lenders and our customers. Private lenders funded our Game Center expansion in 2016.We are a single, brick and mortar store with the vast majority of our sales made to local customers. 2017 saw us enter the Magic online singles market through the new TCGPlayer Pro. Although we're late to the online singles party, Magic online singles now accounts for 1% of our sales over the last 12 months. That's not very much, but it served the important purpose of allowing us to better serve our in-store customer by having a larger selection and a method to sell off locally unpopular cards. Our best selling game in the store is Magic and the best selling "item" in the store is Magic singles. That's probably true of many stores. 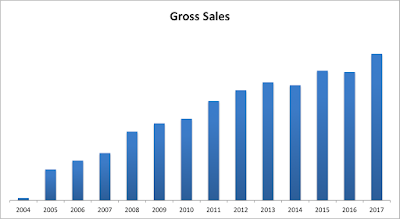 Sales in 2017 were up 14%, as we capitalized on our expanded space. While the large Magic events this space was designed for never materialized, we instead saw a doubling of our nightly events, with a wider variety of events and the same events held on multiple nights. We were hoping for a 5% sales increase through this expansion, so 14% is pretty phenomenal. That's good, because as usually happens, our expenses were higher than forecast.

Sales were well over a million dollars for the first time and lagging profit margins throughout the year finally hit a respectable overall level in December. Despite our high level of profitability, we also had high levels of construction loan payments that left us little operational wiggle room. Paying supplier bills on time in 2017 was a challenge, but I'm told our tardy payments are still way better than most stores (which is kind of sad).

That's a minor complaint though. As I told one investor today, our cash crunch means I pay expenses and high loan payments AND still go on vacation, BUT we have little money for future projects. It's  frustrating but it's also an enviable position for most store owners. We will make our loan payments and bide our time until we have capital for the Next Big Thing.

With our 30% bigger space, we also saw bigger expenses: Insurance doubled, interest payments doubled, and labor increased around 15% as we added staff to handle the influx of customers. Wages also suffer from the steep increase in minimum wage, which will continue to rise every year indefinitely. Outpacing wage increases is going to be a challenge for all California small businesses for the foreseeable future. Our high tech lighting and HVAC meant we only saw a 5% increase in utilities. 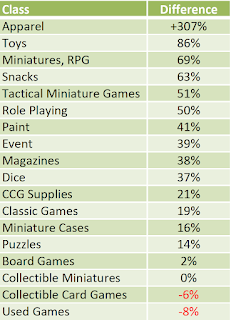 2017 was a rebound year for sales. As much as I discounted 2016's sales numbers due to construction, 2017 sales likewise saw huge increases for the same reason. 2017 was a year where diversification played an important role. Half our sales are CCGs and board games and both those categories were flat or down.

We saw enormous sales in other departments, with notable ones being RPGs and miniature games up 50%, and our fast growing geek apparel department growing over 300%. It grew 168% last year and it's becoming a larger part of what we do. We're in year 15 of this business when you would be expecting low single digit growth, so these are pretty extraordinary numbers.

This year saw a lot of retrenching of existing games. Warhammer 40K dominated miniature games with solid 8th edition releases. Dungeons & Dragons and other RPGs have shown great strength and interest, and our sales are accompanied by four nights a week of role playing in our Game Center. Most of the CCG decline was Pokemon missing a beat and missteps by Wizards of the Coast with Magic. Magic was down slightly for WOTC in 2017. Our expansion into online Magic singles didn't help in this area either, as sales of singles were down 3%, despite greatly increasing our singles catalog.

Board games remain a chaotic category. Kickstarter continues to see increases, and although it's only about 10% of the US market, it saw a 30% increase in funding for hobby games in 2017. That said, it would be wrong to think game stores are shut out of this market, as many of our top sellers in 2017 came from backing Kickstarter games as a retailer, notably: Gloomhaven, Massive Darkness, Dark Souls and The Grimm Forest. 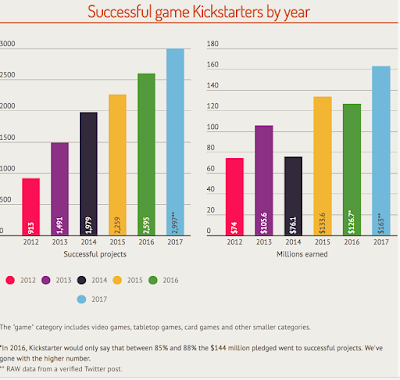 There seems to be an attempt by the larger board game players to flood the channel in defense of their position. A good example is Asmodee sending us a huge influx of new and reprint games on a weekly basis. Games Workshop and Wizards of the Coast also seem to be stepping up releases in a crowded marketplace. I'm told some customers are not only burning out on the release cycle, but are seeking the lowest prices to keep up with the fast release cycle, not a positive development for brick and mortar retailers.

The huge influx of board game releases averaged around ten new board games a day. The end result is great games unable to gain traction in a crowded marketplace and overwhelmed retailers dumping great games, often before they even hit the shelves.

There are simply too many good games and not enough customers to buy them. It's not uncommon to stare at our new release table with six unsold games, half a dozen copies deep, with stellar reviews. It's no longer enough to just have great product all the time, we need new ways to engage customers and show off the best of the best. We are of course in a board game bubble, but it's a resilient bubble with enough flexibility, enough channels to find customers and continue for quite some time.

2018 Plans
I'm expecting 2018 to stabilize, which might not sound exciting, but it's what we need right now. My Magic experts believe the next release of Magic could break the downward spiral. Brand value protection is becoming the norm with board games and if we could develop a demo program in 2018, I think we could see some great results.

Miniatures in 2018 will be about Star Wars Legion by Fantasy Flight Games. We're going deep into this game, with enough copies to score an early demo game with my assistant manager dedicated to getting it on the table to teach and show off. Whether Fantasy Flight can handle stocking a game as broad as legion while managing organized play remains to be seen (I only have to look at X-Wing to have my answer). I went deep with Legion because Fantasy Flight gave us the opportunity to work to make this game great in our store while also protecting brand value online. Games Workshop does the same, which often leads to great successes with that brand.

Role playing in 2018 will see more early releases by Wizards of the Coast, with Mordenkainen's Tome of Foes likely to be similar in popularity to Volo's Guide. We're attempting to run a Dungeons & Dragon summer camp in June. The camp has been well received by the online community, although it hasn't resulted in sign ups. We'll continue to market that.

At our current sales and profitability level, even modest growth would appear to be a win. However, with all of our costs rising well above inflation, especially labor, we need better than 4% growth every year. This is true for every small retailer in this state, whether they know it yet or not.

My 2017 plans included transitioning to full time employees and the like, but that will have to wait. Our debt levels mean we'll need to run lean for a couple more years at least. We really didn't have a solid idea of what our finances looked like until we had our tax forms in hand for 2017. On the plus side, regardless of your political views, 2018 should be a better year tax-wise, and that will result in more opportunity for the business.
Posted by Gary Ray at Monday, February 19, 2018