I've got a good friend whose an author and wealth manager and we were talking about my new book. He said, "You've done a great job creating a successful store, but you've completely failed to plan for your financial future. We should do a writing project about that." Ouch! As most of what I've learned from small business comes from failing, before succeeding, it sounded like a good idea. In the short term, I wanted to write something that might be helpful to new and existing store owners. If the book were still in progress (it's at the printers), this might be a final chapter.

As a small business owner, there is no "best time" to save for your financial future. I'm referring to retirement. Investopedia gives the advice of how much you should have saved as a multiple of your salary. At 40, you should have saved two times your annual salary, at 50 four times, and it goes on. The reality of starting a small business is something is always taking your financial attention away from the critical job of saving for the future.

When I started out, I was on a basic survival, shoestring budget for quite a long time. I nearly halved my income to start the store, going as far as placing my house on an interest only mortgage, just to make it work. My salary was still well above market. I had the luxury of a house and a small retirement fund already because I had a good paying career before. Because I re-invested after three years, building out a larger store, this survival salary lasted me five full years. During that time we adopted a child and my wife left her job on disability. This put great strain on our finances. Then the housing crisis hit and finances went into a tailspin for a few years and I nearly lost the house (but came out well ahead, which I talk about in the book).

When my fortunes improved, I spent money on the store once again, buying a pinball machine and a van and basically all the things I had put off. My notes from our annual Board of Directors meeting had a directive written on the top: "NO MORE PIMP VALUE." Personally, I had also engaged in adding pimp value. I had an indulgent spending period after a fasting period. I bought a new car. I indulged heavily in hobbies. I went a little nuts. In the future, I've got not only construction loans for another three years sucking all my spare money, but a white board with about $20,000 worth of projects. I've also got a dream of doubling my inventory. There is no good time to save and there won't ever be one, if I wait for it.

The best time to save for retirement, as a store owner, is right now. Besides life's financial demands, the store will never stop requiring your money and attention. A small business has often been described as a mistress (manstress?), with strong demands of time and money that never cease. If I were starting over, I would have taken my subsistence salary, and built in retirement savings. My meager salary would have been maybe 10% higher. Perhaps I would have to save 10% more money before I started. I advise new store owners to build their store around the salary they need, but I never discussed the meaning of need. You will give up years of strong earning potential to start a store, as my father warned me. You'll be voluntarily putting yourself in a hole. If you can come out at the other end with some retirement savings, that hole won't have been nearly so deep.

My book won't be making a lot of money, but I'm thinking of dedicating all the proceeds to the retirement savings I've missed out on. Pro tip: try to find multiple income streams. Strangely, I've saved for years for my son's college fund, but as I've told my wealth management friend, that's because I'm more afraid of being a bad father than living in a cardboard box. If you're reading this and have a store, start saving now. If you're creating your business plan, bump up your salary requirements to include retirement savings so you can avoid the mistakes I've made.

Finally, realize the business will always demand every spare penny you have. Always. It's up to you to manage your Return on Investment (ROI), which means taking money out as part of the process of putting money in. I've made ROI a critical part of the planning process in my book. Anyone can make an amazing store and overspend on the build out. A good retailer understands the value of capital and sees a long ROI as wasteful and failure of sorts.

There is such thing in small business as enough. There is modest business growth without constant reinvestment. You most definitely need to grow or die, but it doesn't always mean reinvestment. Part of your dreams for your store should include a strong financial future for yourself. Planning to ride into retirement with a retail store earning income in an unknown retail environment 20 years from now is a very dangerous plan. Think about how retail has changed in the last 20 years: malls were hot, ecommerce and Amazon were in their infancy, Magic was just a card game and no the economic driver for just about every hobby game store. As small business owners, we are constantly changing and evolving to meet new demands. When you're 85 years old in a retirement home, you will not be in a good position to pivot your store to meet such demands. Start saving now. 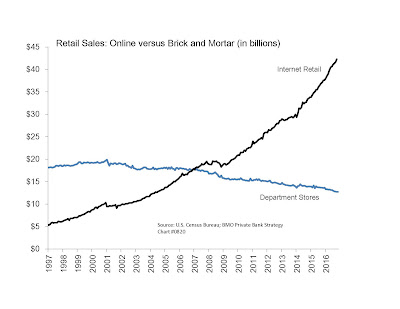