In 1977, a 39 year old game designer, a previous insurance underwriter, published Advanced Dungeons & Dragons. I mention some of these details, because this is about age and D&D. The target market of this game was likely the men (and occasionally women) who played similar games at the time. That's what I surmise from this early photo.

At age 11, I was clearly not the target market, but this game still fascinated me, and by the time I was 13, myself and friends would try to out geek each other by quoting the rules. We only had three books, the holy trinity, and they were so well used, you could run your hand across them with eyes closed and instantly find various sections, like combat tables and treasure charts.

This was our game, and on page 12 of the super secret Dungeon Master's Guide, that everyone owned because everyone eventually DMed, it spoke in great detail about aging. As an adult, I can't help wonder if this brilliant insurance underwriter used actuarial tables or other data to come up with this clever bit of game mechanics. I note that 40 is the cut off age before you become a decrepit, middle aged human, losing a point of Strength and Constitution, but gaining a point of Intelligence and Wisdom. Gygax was likely thinking about this at 39 when he wrote it. Because first, who wouldn't at age 39, and second, he was in insurance, where mortality and risk was the business. Was it data, the desire not to feel old, or something else that created these brackets? We'll probably never know. Here's the chart for age categories (photographed out of my taped up DMG): 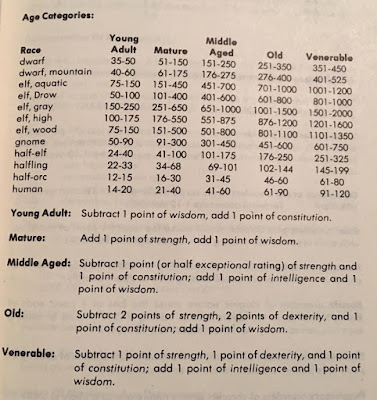 Codification of adult life in very serious table format had the effect of making this seem authentic to a young teenager. Tables were something we had just learned about. Tables were magical devices used by adults to display huge amounts of information in visual format. I wouldn't see an actual actuarial table until I was in college, and that also blew my mind. Statistically knowing the likelihood you'll die at a certain time by gender and age was straight out of the DMG.

As a young teen, this stuff was magical, and the message was clear, being young was heroic and good. We were young. Our characters were young. Getting old was bad and it ruined your plans, so this table tended to be used in only the most dire circumstances, like getting touched by a ghost. Poor fighter is now a wretched 50 year old (like me now).

It wasn't until we were adults that we started playing with this table to gain an advantage. My friend Jay would play an elderly wizard and tweak his character for some extra Intelligence points, in exchange for feebleness, something we would have never considered as teens. We've min-maxed the heck out of the aging rules, going so far as having people who couldn't even walk for the sake of brain power. That's adults realizing the power of the mind over the body. As kids, anyone over 30 was elderly, and when we played other games, like Top Secret, 30 seemed like a prime age. Most of my characters started at 30.

I didn't give this stuff much thought until we started getting older, but kept playing, adding younger players. We've got my 13 year old son, players in their 20's, those around 30 and quite a few of us in our 40's and now 50s. We're all at the same table, playing the same game by the same rules. If you want to keep the 13 year old from walking into the meat grinder because of his real world low wisdom, that's the parties business, not mine as the 50 year old DM. Generational D&D is something we're learning as we go. I no longer consider 30 the pinnacle of character perfection. In fact, if I think about it, it's probably the waning days of physical prowess without the benefit of experience (wisdom).

While walking down a wet street in Guanajuato, Mexico last month, right after a big monsoon storm, I slipped on a ramp and fell hard. I knew I was falling and from years in martial arts, just let it happen, rather than struggle and smash my head. I cut up my arm a bit, but it occurred to me our more adventurous travel days may be fine for this middle aged 50 year old, but might be a bit too much for an "old" 61 year old. Gary Gygax might have had that part right. That's my 1 extra point of middle aged Intelligence and Wisdom talking. 61 year old me might have a different idea about that though, much like 50 year old me doesn't feel as decrepit as the DMG would suggest.

Oh, and thanks Wizards of the Coast for D&D 5th editions complete omission of aging rules. I hope to still be playing your games when I'm Venerable.
Posted by Gary Ray at Sunday, August 12, 2018