I would rather talk about sex, religion or politics than demographics. Demographics is about class and race and some rather unsavory conclusions about how people spend money. Many new store owners ask about demographics and I'm reluctant to have that discussion casually, because it's nuanced.

Demographics for a game store are how people spend money right now.  We may want people to spend money in a different way, we may (and should) build a store inclusive to everyone as we seek out new markets, but demographics is about right now. How is money being spent on hobby games right now. Who are these people? 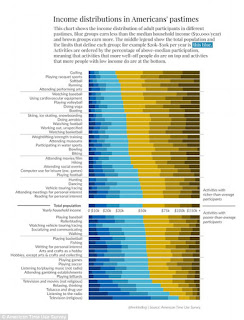 Some store owners and even corporate retailers erroneously believe they should place game stores where there's the most money. Games Workshop did this in my region about ten years ago, placing a store in the highest income zone in my region. I laughed, and they were gone in a couple years. I've charted out my customers by zip code and those high income areas might as well be pastures, for the revenue it brought me.
High income is not the key to demographics. The wealthiest among us tend not to play hobby games, or at least they don't buy them in local game stores. I used to be one of these people before I started, just making six figures, driving a new BMW and wondering why stores weren't catering to me with my particular tastes. It turned out I was an outlier. I was not the target market, and it took opening my own store to realize that. My high income peers spent their hobby money on skiing, buying cars like mine, and travel. The chart above shows hobbies by income (click on it to blow it up).

On that chart, towards the bottom is playing games. It's a past time for those making around $50K a year. However, I would put hobby games a tad hire than that, being a high brow type of playing games, perhaps $60K-$80K a year. This is my tribe. Any higher or lower and I'm spinning my wheels.

I have no way to track education amongst my customers, but my general feel for hobby gamers is they are fairly well educated, but somewhat underemployed. They are smart people underutilized in the work force. What that tells me as a store owner is I seek out high education levels but only upper middle income. A low level of education and a high income is not my tribe, as games for them are Monopoly and they spend money on their Jeeps and jet skis. Low income and high education better be a college campus or I'm sunk there too. An awful lot of store owners are slogging away in communities like this due to the hollowing out of the middle class.

The graphic below is from the Phoenix area (thanks to Michael Bahr for finding it). If I were planning to put a store in this region (which dear lord doesn't need another one), I would be looking for that third tier of income, the $60K-$90K crowd. I would shun higher and lower income areas and hopefully find a central location along a corridor with third tier customers. I could be entirely wrong about the Phoenix metro area, but that's where I would start. 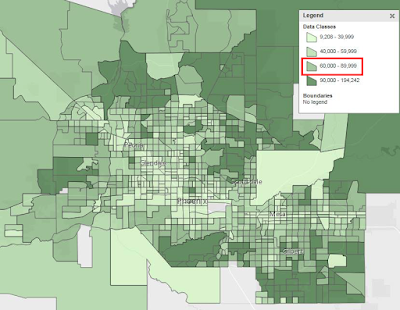 Of course, I would also want to look at the education level of these Phoenicians, hoping they had college educations and they weren't high paid blue collar workers. Now you can see why this is a touchy subject.

Gender is really only an issue if you're planning to open near a military base (85% male). Our customer base tends to be 75% male, but there's not a good way to build a store around that, since the population is evenly split by gender. Note that college campuses used to attract more men than women, but now women make up 56% of college campuses, with their number expected to rise slightly over time. Gender is a growing segment of hobby gaming, however, but that's more about store design than choosing a location.

Now lets get on to the elephant in the room, race. The hobby game trade does not appeal equally across racial demographics. It just doesn't. Publishers might dabble with themes and concepts within hobby games, but you can't change cultural norms by trying to make a version of Catan that appeals to a new racial group, although games like Yuigoh have somewhat cracked that. If a group doesn't play hobby games, it's going to be tough to change behavior. We explored that a bit when we visited game stores in Mexico and Guatemala this summer, where machismo meets Not Invented Here.

The vast majority of our customers are Caucasian and Asian. I live in Richmond, California which has some pockets of the right income and high education levels, but racially it's primarily African-American and Hispanic (65%) with a lower income threshold. I enjoy living in Richmond, but I wouldn't put a hobby game store here, so I drive 30 minutes a day to where a game store makes sense. As my neighborhood gentrifies, the local people fret, but I see game store opportunities emerging. Maybe another decade. I'm so conflicted on the topic of gentrification as a capitalist liberal.

Anyway, this my impression of what I'm looking for in a game store demographic. There are entire states in this country where this demographic doesn't exist. It's not there, no matter where you look. When you don't get your demographic, you either get wealthy people who couldn't care less about your existence (cater to their children and sell them toys, there are examples of how this can work), or you get gamers obsessed with value-seeking in a salted earth retail environment. I can't tell you not to build a store on salted earth. People want to put stores in the communities where they live. However, If you have a choice, look for greener pastures (but only a few shades, not too green!).
Posted by Gary Ray at Sunday, October 14, 2018