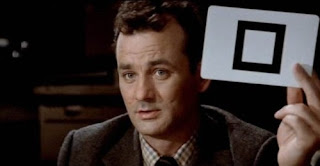 One of my friends loved to play a fighter in our D&D game. He had a high powered job, owned his own business, had a growing family, was active in the community, but had zero time to learn new editions of D&D, so he played the fighter. Run in and smash monsters. Mostly he wanted to hang out with old friends. He and I both referred to him as the Venkman of D&D players.

The character Peter Venkman from Ghostbusters is a brilliant scientist, but he's also a charlatan. He's highly educated but refuses to play his role, which allows him to think outside the box. He kinda knows his trade, but he's highly skeptical and doesn't take it too seriously. As a metaphor, being the Venkman embraces imposter syndrome and turns it on its head. You know you're smart enough for this game and you know everyone is faking it until they're making it. Eventually you'll master what's going on and rise up to save the day. Much like Peter Venkman.

Imposter syndrome is strong in the game trade. Most of my peers are young, often having started in their 20's or early 30's. Most never owned a business before. Many will tell you their previous game trade experience was working a few years in a game store before owning one, or like me, they had never worked in a game store before. I also can't think of any with business degrees, but most have some interesting experience in their backgrounds.

If you've never owned your own business before, let me tell you the the freedom is both breathtaking and terrifying. It's like parachuting out of a plane with armfuls of silk and being expected to knit a parachute on the way down. Will you make it? Nobody cares one way or the other. Society doesn't have a support network for people dumb enough to jump out of planes. For months I felt like the job police were going to come in and tell me to get back to my real job. As you leap out of the plane, you scream, "I don't belong herrrrrrrrrrrrre!"

Those of us who have succeeded did so by quickly seeking out and mastering best practices, not because we wanted to succeed, but because we didn't know what else to do. I learned how to run a store by running a store, losing a ton of money along the way. During this time, many will tell you about their imposter syndrome. For me, I always fell back on Venkman, referring to myself as the Venkman of game store owners. I'm smart, I'm brash, I can figure this out and save the day, but mostly I'm faking it until I've made it. My investor friends, including the fighter, would use the Venkman metaphor in our annual meetings.

Being a Venkman does mean rising to the challenge, rather than just being cynical and cocky. During my first Christmas season, after a month in business, an older woman scolded me for my pitiful board game product knowledge, as I knew perhaps six board games. The next month I started a private board game night, staying late once a week with friends to learn new games. Within a couple years, I had 100 or so board games I could talk about, having played each of them, and probably four times that number I could fudge. Fudging, reading the back of the box, comparing what you don't know to what you do know, is the key to board game sales. There are ten new board games a day. Nobody knows every game. Nobody needs to. 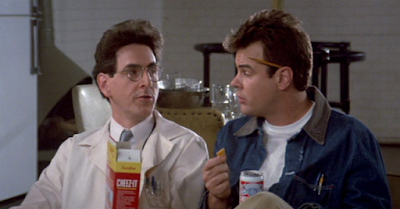 Being the Venkman also means relying on those around you. I'm probably our third best sales person right now, in year 14, but I've got my Egon and Ray to help me out. An important Venkman trait is to surround yourself with people smarter than you. I've got a Magic judge on staff who can answer any Magic question, a board game guru who can sell $1,500 in board games on a busy December day, a manager who can handle any crisis and solve any problem, and support staff who go out of their way to satisfy customers. With such great staff, it turns out I'm still the Venkman.
Posted by Gary Ray at Wednesday, October 17, 2018