Let me tell you about my new wristwatch. No, don't go! Come back!

I accompanied my son's boy scout troop on a camping trip. As this was my first time with them, I went out with a list and bought the gear they were expected to carry. I didn't want to be a burden, and I do love me some gear. A wristwatch was on that list.

I last had a wristwatch ten years ago. I did a little consulting work for a friend, enough to buy a nice watch, and when it broke, I took it in for repair. I never got a call back. At the same time, I enjoyed being free from this bit of technology that had dogged me all my life, staring at me from my wrist. The repair shop didn't call. I didn't call the repair shop. Voila! I no longer owned a wristwatch.

I do have a wristwatch on my wish list. It's a $300, Casio G-shock solar Master of G with a compass, altimeter, barometer, thermometer and sunrise-sunset date. It's a wristwatch that's more Swiss Army Knife, as opposed to the very basic $50 G-Shock I bought for the scouting trip, which is more a single blade pocket knife. The Master of G only reluctantly tells time, as opposed to my basic G-Shock, which has two really cool functions: a) It tells time, and b) It tells time in the dark. The unstated c) is it's classically unpretentious like only a $50 wristwach can be. Respect the G-Shock.

My son is jealous of my basic, $50 G-Shock, as I bought him an even more basic Casio watch at Target for $20. This is a boy with two iPads, an Xbox, and an allowance that's spent entirely digital. A wrist watch is a novelty, an interesting gadget, a link forward to adulthood and a link to the past of a more basic level of technology. His fascination with this tech from the 70's had me thinking about hobby gaming.

Hobby games for most of us older folk has been on a linear historical course, much like wrist watches. I remember when the digital watch was shiny and new, much like I remember how Dungeons & Dragons hit the world by storm. With our linear perspectives, these bits of culture have played one role in our lives.

They've been with us all along, having been initially ridiculed, peaking in popularity, and then falling along the wayside for most people, while we chugged along slinging D&D books through half a dozen iterations. We once kept playing D&D a secret as to not offend religious relatives or bullies looking for easy lunch money. Now the geeks have inherited the Earth and celebrities declare their love for the game on talk shows and publicly display their prowess of Tolkien knowledge.

Discovering hobby gaming had been re-invented, while I was in the hobby, was beyond my comprehension, and of course it did it with a new technology (YouTube). This is a modified Gartner Hype Cycle, where perhaps both digital wristwatches and D&D have been slowly climbing the Slope of Enlightenment to reach a new plateau. Or maybe it's entirely cyclical and we're someplace uncharted. I'm sure there's a fashion industry model that instinctively gets this.

For now I'll be at my desk, planning my Vault of the Drow 5E campaign and trying to figure out how to set the alarm on this damn thing (I'll use YouTube). 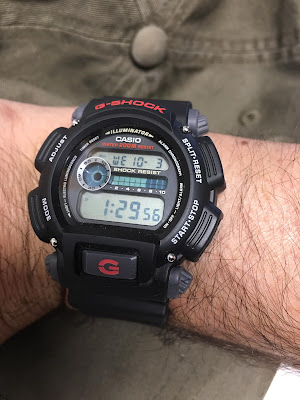