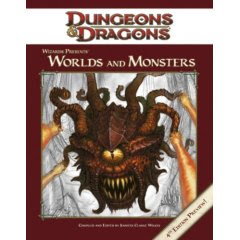 This book is harder to review than Races and Classes, mostly because it discusses world design, planar makeup and where monsters fit into the mix. Instead of a full review, I want to touch on some of the themes that run through it, and how it should affect play.

D&D 4 is designed as a toolkit. DM’s are given the choice of how to use an element and its accessibility in the game. For example, The Underdark is a fantastic location, but it has always been difficult to get to and only survivable by high level adventurers (like the planes). If something is useful or cool in D&D4, the philosophy is that it should be easy to use. Interesting places are not necessarily hard to get to or deadly, they’re available as a resource to the DM to use as they see fit.

Asymmetry and organic design. The Great Wheel is dead. The planar makeup of past editions, based on alignment, the elements, types of energy, transitive planes, the colors of the rainbow and the like are gone. Many of these locations still exist, but their strict regimentation has been dropped for a more organic feel. Dropping the alignment system has unraveled a lot of regimentation in this edition, with the planes being the best example. Many monsters were created solely to populate these places. Some of them were cool, others like the Ooze Mephit, were pretty useless. Many existed only to fight each other, and had little to do with how we played the game. For example, the idea of evil fighting evil has been dropped as much as possible. The devils are fighting the demons? Who cares? How does that make my game more fun? The avatars that fought evil on behalf of the gods have been dropped. Isn’t that the job of adventurers? The new D&D4 design is meant to maximize the value of the information presented, and if you can’t use it in your game, it doesn’t have value.

Part of the asymmetry is a host of new planar locations. We have new places, like the Feywild, a parallel faerie plane straight out of mythology. The complexities of the Great Wheel have been dropped for ideas that are fun, make sense, are useful and don’t have to fit into a strict paradigm. Giant planes of fire are gone, as are transitive planes that existed only to get from one plane to another. The astral plane (now the astral sea) has been re-worked to be the prime location for previous denizens and locations of the outer planes. Strange planar mechanics for movement and the like are no longer necessary.

Letting Icons Shine. Strong iconic elements of past editions, such as monsters and locations, have been retained but tweaked. Dragons, for example, have been reworked to make them more visually and tactically distinct and more fun to fight. I can count on one hand the number of dragons I’ve used in 3rd Edition, due to their complexity. D&D4 has learned how to make them more interesting and more unique to their type, rather than simply defining them by color and breath weapon. The art will be distinct, but so will their tactics. The designers drew heavily from the miniatures game, which showed how an individual monster could be interesting by giving it multiple actions per round. For example, dragons have multiple immediate actions that take effect under certain circumstances. They have tactics on how they fight, minions they tend to use and places where they hide. Giants also have been declared iconic, and they’ve been re-worked to be more elemental instead of just large humanoids. There will also be huge variants. They wanted to make them all huge, but hey, we’ve got all these plastic D&D miniatures, right? There’s an Against the Giants type adventure in the near future where we’ll see giants showcased.

A Thousand Points of Light. Locations and iconic magic items from old editions have been retained. The Temple of Elemental Evil and The Hand of Vecna still exist, with flexibility where they can be found. In fact, there is no default map for the 4E world. The concept is that we have a handful of fallen civilizations out there, a bunch of iconic places, and a bunch of points of light, safe harbors from the sea of danger. Adventurers start in a point of light and explore their world from there, but we don’t know what’s over the horizon and we may not get there safely. Humanity no longer dominates and their fallen civilization is no more important than the other fallen empires. Of course the designers will still have Forgotten Realms and other settings later on, but the default setting is more a toolkit than a well defined world with maps, trade routes and drawings of people and their fashions. This keeps the mystery intact and allows DMs to use material as they see fit.

A Fantastic World. D&D4 is meant to be a departure from the constraints of an alternate medieval Europe. The idea here, similar to what we saw in Monte Cook’s Ptolus, is to accept the fantasy elements when considering world design. It’s not a medieval world with a fantasy overlay, but an organic world where magic and monsters are accepted as part of everyday life. Magic is real and available to some extent. Wizards exist, and although powerful ones are rare, nobody is getting burned at the stake (unless that’s what you want). The designers ask the question why something as useful and inexpensive as a Potion of Healing is not available in the Player’s Handbook? If you can choose a Griffon mount in the game, why isn’t there a price for one? At the same time, the designers attempt to preserve the D&D feel. They don’t want magic as technology, the kind of stuff that rubbed people the wrong way with the Eberron setting.

An Ancient World. Besides being a fantastic world, they took a layered approach to civilizations. The various civilizations are in ruin, for the most part. These civilizations were built on top of older civilizations, without relying on the pasts developments, preserving a sense of mystery without a feeling of societal or technical progression. Of course, you can learn more about these older civilizations by exploring ruins or old libraries. This is also part of that toolkit feel to the world. Really, what does a DM need from the core materials? For the most part, they need flexibility, resources like magic items and locations that aren’t tied to a particular setting, planes and monsters that are useful and not designed as filler, and most importantly a world that doesn’t inherently constrain their creativity. Don’t see something you want? Maybe it’s buried in a past civilization, right under the adventurer’s feet.

How Will I Use It? Some of these ideas were already going to be part of my new campaign. The sense of wonder, of what’s over the next hill, is a big part of this edition and it should play well for older, jaded players who have survived the first three editions of this game (or more if you can count back that far). The faerie plane (Feywild) will see me dropping in Desden Files like faerie interaction from the beginning, with plenty of Shakespearean faeries. Since I am developing my own campaign world, the toolkit elements should work great for me. They’ve acknowledged that DMs already use the game materials as a toolkit by not tying down their materials to various locations and situations.

What I Don’t Like. I’m concerned that the toolkit approach won’t be cohesive. Yes, giving me a bunch of places, gods and items with lots of flexibility is good, but the new edition will rely more on supplemental material to make it useful for less experienced gamers. I really don’t like dragonborn. There, I’ve said it. Maybe it’s because I’m not twelve, but I’ve never wanted to play a reptile. I’ll still use them, and I think they’re a much better concept than a half orc, but they have no appeal for me. Using tiefling was a good idea, but I don’t care for their “cursed” origin. I’m concerned that by preserving so much iconic D&D culture that we’ll have a lot of re-hashed products. Do we really need a third version of Temple of Elemental Evil? Did past designers really plumb the depths of fantasy creativity to where we can’t come up with better magic items than a shriveled lich’s hand with magic powers? It’s part cultural preservation, part design crutch with obvious remakes planned in advance. There will also be the kind of legacy eye rolling when it comes to things like the new stories of old gods. Lolth is a lunar goddess split from her light side of the moon sister. I don’t care, but you know it will drive some players’ nuts.

Bottom Line. I like what I see. For veteran gamers we’ve got a logical re-working of the rules and game world that drops a lot of baggage. The new design allows for the most important thing we need from a new edition: The sense of wonder that comes from the unknown, the adventure just over the hill, the fear that all could be lost if our heroes don’t succeed. For younger gamers, possibly those who have only experienced third edition, I think there is some resistance to change. What I consider trash or unnecessary baggage, they may consider treasure. They’re still in love with their new game and they still have a sense of wonder for what was only recently presented to them.
Posted by Gary Ray at Monday, January 28, 2008