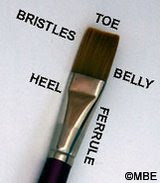 One of the most important tools of minaiture painting is the paitn brush, yet we don't know a lot about them. I've just gone through the most intensive painting period in my life, having just completed two Warhammer armies in the last year: 3,000 points of 40K Imperial Guard and 1,200 points of Fantasy Ogre Kingdoms. The one thing I've learned is that you can't beat a high quality sable brush.

I've gone through a LOT of brushes over the years, and sable brushes are the ones that stand out for both quality and durability. I'll periodically go through my brushes and mercilessly snap any that are no longer performing. After the last round of brush snapping, I was left with a handful of sable brushes and one synthetic. The sable brushes were from a variety of manufacturers: Vallejo, Privateer Press P3, and Reaper. It really didn't matter the brand, as long as it was sable. These are the brushes that last the longest and maintain their shape. Games Workshop claims that their brushes are sable, but I think they're mistaken. If so, they're the worst sable brushes I've experienced, and at sable brush prices. 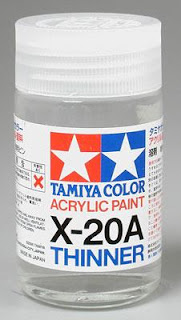 A good sable brush will cost about $10-12. I've never used the Windsor-Newton brushes that go for $20 each; I just can't imagine that they're that much better than a quality sable hobby brush. I suppose some people feel that way about sable compared to synthetic. Anyway, the key to making these brushes last comes down to cleaning. First, avoid getting paint on the metal ferrule, as the bristles splay and the brush becomes more difficult to clean. Second, I tend to "twirl" the brush against the side of a clean bowl of water, as opposed to pounding the "toe" into the bottom. That's just common sense. Finally, I'll periodically take a clean brush that's starting to look a little ragged and I'll dip it in acrylic paint thinner. I use a bottle of Tamiya thinner for this purpose. It's not rocket science, but just a little extra care and my sable brushes have lasted many months of intensive use. Meanwhile, the synthetics seem immune to any rejuvenation, and end up with the snap treatment.