Dundracon and The Game Industry

Alternate Title: The Blind Men and the Elephant

I spent Saturday afternoon at Dundracon, taking advantage of my dealer's badge and willing board gamers. As much as I enjoy working conventions, I've delegated that to staff. Sales were fairly close to previous years, with the perception that there were fewer attendees overall. That's all I wanted to know, so I headed over to the board game room.

I played a game of Tikal on my own copy, the first time I've played my own copy of a game in several years (my three year old seems to have absconded with a treasure token). I had the most fun in a game of Dominion. Dominion is a great game, theoretically. I say theoretically because the rules are complicated enough that we're still trying to interpret them correctly. We've had fun along the way, however. The nice thing about the game is it's got a lot of different ways to play (using the rules), making it not only fun, but a great value.

The other reason I went to Dundracon was to attend the "state of the industry" seminar. I enjoy hearing industry people talk. There is no reliable data in the game industry, so it feels like the parable about the blind men and the elephant. Each blind man steps up to the elephant and describes it based on the body part they initially touch. Get enough blind men in one room, however, and you get a better impression of the beast. The panel was comprised primarily of role-playing industry people: Aldo Ghiozzi from Impressions (a consolidator who represents smaller RPG publishers to distributors), Steve Chenault from Troll Lord Games, Joe Goodman from Goodman Games, and Darren Watts of Hero Games. Some highlights:

Overall Healthiness: The industry is healthy overall, with various segments doing better or worse than others. It's very hard to generalize about specifics, since real data is scarce and personal experience tends to be regional or dependent on ones own business. That said, there are some problems.

Distributors are a Bottleneck: Most agreed that the distribution system remains the sticking point in the game industry. They're not taking enough risks and don't order enough from manufacturers, resulting in games being out of stock for long periods. They don't provide enough of a service, especially marketing of games, for what they charge. The term "carrier pigeons" was how one RPG publisher, not present, described the distribution tier. I also heard the old complaint that they remain a bad source of information for retailers, regarding status of products. Is it out of print, temporarily out of stock, or what?

My personal experience is distributors have listened to these complaints and have gotten a lot better over the last couple of years. I've had fewer out-of-stocks, and when I do, I'm always told why. My ACD sales rep makes a point of telling me why something is not available every time, almost to the point of annoyance. Alliance's online system is far more accurate now than a couple years ago, with proper notations on why something is unavailable. Competition is fierce and nobody wants to give the impression they have a poor fill rate. Still, there are plenty of complaints on the front end with publishers, which leads to the next big trend.

Sales are Trending away from distributors (and thus game stores). Where once these RPG publishers sold 70-80% of their role-playing books through distribution to game stores, now it's only about 50%. The other 50% is sold direct to customers (especially Hero, which asked it's customers to do so, which pissed off distributors and retailers), through the book industry, or to Amazon. Troll Lord and Hero have stopped focusing their attention on distribution (and thus brick & mortar stores), as they've put their energy into these growing revenue streams.

I would also note that the monolithic distributor isn't always the case anymore. Many of us retailers are increasingly using smaller, specialized distributors to get around the bottleneck, such as Indie Press Revolution (small press RPGs), and Warpath and eFigs (small press minis). Going direct is also an option, but with retailers not willing to take a big risk, some companies are supplementing their direct to store sales with traditional distribution. Soon we'll have Lock & Load publishing and Minuteman Press available through our primary distributor. Distributors are also dipping into the indie mini trend. Alkemy, for example, was just picked up by ACD.

My big question to the panel: Does that mean brick and mortar game stores are less relevant? They emphatically agreed that no, brick and mortar stores still play a vital role in promoting their games. So why the shift? The problem is two-fold, I think. The distribution system has become a bottleneck for these small publishers, as they've mentioned. Second, although we don't have hard data and the panel doesn't fully agree, there are far fewer brick and mortar game stores in the country. My guess is we lost between 30-40% since I started four years ago. If your local game store goes out of business, you need to find a different source. Those game stores that have survived are stronger and probably haven't seen a major shift with role-playing games. That tier of the industry just has fewer overall sales. Should this worry me as a retailer?

Yes and no. Locally, if my sales remain strong, why do I care what the overall percentage of the pie looks like? On the other hand, if the balance continues to shift towards other sales channels, there may eventually be some fallout. I would argue that these publishers might provide us less support for their products, but there really isn't much support to begin with. The panelists range from companies who tell their customers to stop buying from brick and mortar and buy direct (Hero) to companies that offer brick and mortar promotions (Goodman). Most role-playing publishers have zero contact with brick and mortar stores, other than industry events. They don't dislike us, they just have no money for marketing, and when they do have money, it's best spent avoiding the distrubtion bottleneck and going direct to the end user.

Where I'm most concerned is if the gatekeepers of the industry, the distributors, become such a problem that new publishers skip them entirely. Imagine if the shift is 80% other and 20% game distribution and you're a new publisher. How many hoops would you jump through before you gave up on game distributors? You certainly wouldn't consider them your first option. At that stage you probably would attempt to get into distribution after, you've exhausted all other avenues. One of the audience members was interested in selling his RPG product, and the advice was to try to go it alone first, self-printing, PDF publishing, or whatever, but know that the distribution tier is finicky and difficult to work with.


How about retail game stores? Diversification and running your business like a business were key points, which were not surprising. The general feel I have is that if you've weathered the industry over the last few years, meaning you haven't been dragged down by the collapse of the collectible markets or the softness in role-playing games, then you're probably running a quality operation. There are still "bad" game stores out there: dirty, unlit, cluttered, but the panelists noted that often these stores are often packed with customers. Not every game store needs to attract the general public and for some store owners, they don't want to. That's a sentiment I can appreciate, although my mortgage keeps those feelings in check.

D&D 4. This was the first topic of conversation. How can you not talk about the new release of Dungeons & Dragons, the 500 pound gorilla, with a panel of role playing publishers? The consensus was that it surely wasn't as big a hit as D&D 3 on it's release. D&D 3 is believe to be the biggest sales spike in RPG history, so it's not surprising. The panelists believe it's doing as well as can reasonably be expected. Some brick & mortar stores, like ours, do very well with the game. Other stores can't sell any of it.

This led to a discussion about the failure of Wizards of the Coast to properly market the game to new, younger players. This is something they promised initially, after focusing on their core audience. However, if there was a marketing campaign for new players, as was promised for late last year, nobody seems to recall it.

It was six men of Indostan
To learning much inclined,
Who went to see the Elephant
(Though all of them were blind),
That each by observation
Might satisfy his mind.
"The Blind Men and the Elephant" by John Godfrey Saxe (1816-1887) 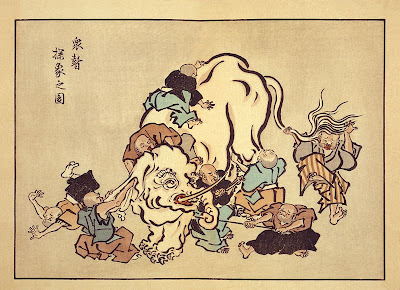