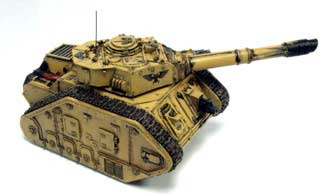 I really like the idea of the Leman Russ Vanquisher. I especially like how its modeled, it being the only tank that looks like my idea of a real tank. You can get some extended barrels for the base Leman Russ from Forge World (on order), but the nice thing about the Vanquisher is it's meant to have a long barrel with huge range. Yes, you could probably make some Freudian analysis of this, but really, who doesn't want a very long protuberance?

Alas, there are some statistical, "mathhammer" problems with the Vanquisher. The most obvious is it's a one-shot, hit-or-miss weapon, unlike the other variants of the Leman Russ, most of which use ordinance. What it hits, the Vanquisher generally destroys, but with a ballistic skill of 3, it only hits half the time. One respected Dakka Dakkaite broke it down like this:

In 6 turns 3 of its shots will hit, 1.5 of those will be ignored by whatever cover the enemy tank is in, and then you'll get slightly more than 1 damaging hit, none of which are going to score a 5 or 6 on the damage chart. The Vanquisher is a waste of time.

You can always create the Paskuisher, by putting the special character Pask into a Vanquisher. This improves your chances to hit to 66% (BS4), at an enormous cost, especially in a low point value game. It's an attempt to compensate for a fatal flaw.

I'm going to keep playing with a Vanquisher (currently substituted while I wait for parts), at least until the hit ratio saddens me enough to try something else. If you happen to be a Vanquisher fan like me, here are some articles and forum posts to give you a better understanding of this vehicle and it's issues: