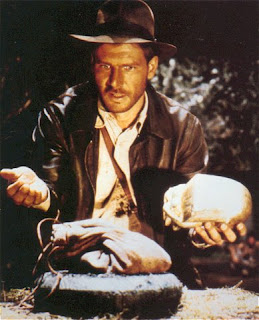 The question: Are indie role-playing games dead? For years we've been buying RPGs from Indie Press Revolution. It has been mostly about buying one or two smash hits, with a smattering of slow selling showcase games to round out the order.  Like other small game trade niches, the indie RPG needs a lot of hand holding and game store staff involvement to be successful. I think we represent the average store in that respect. We're not hard core evangelists, but we push the good stuf and encourage play in our game center.

So much of this question is about one industry champion, Indie Press Revolution and their majority acquisition by DOJ. Acquiring titles from IPR was a rather labor intensive process that usually involved loading up on top sellers and bringing in a bunch of smaller titles that were cool, but performed poorly. To make the economics work we needed free shipping, which required more than just the top sellers. These slower sellers got free passes from our tough inventory metrics because of their social value. In other words, they really didn't work as store products. Before the Dresden Files RPG release, Spirit of the Century, one single book, comprised 30% of our IPR sales. Combined with the Dresden Files RPG, that number jumps up to 60%. So for us, IPR has primarily been a conduit for obtaining high quality Evil Hat products (also see "The othe story here" below).

DOJ now works as a consolidator of sorts, similar to industry middle men like Impressions. Where before we were economically forced to get a side of fries with our burger, smaller selling titles with our big selling Evil Hat, now IPR titles come to us through mainstream distributors. We can pick and choose. Our range of best selling indie press titles are now available with next day delivery and without the bundling with slower selling dogs. So no, I will not have fries with that. Don't get me wrong, I'm a believer that indie press titles are RPG incubators from which nearly everything good in the industry emerges, they just don't sell very well. They should go incubate over there. I've got a mortgage to pay. Being a retailer means I'll take calculated risks, not flog myself constantly after a product fails to perform.

What DOJ has done is make indie mainstream. Every game store in the country that does reasonably well with role playing games should stock Dreden Files RPG and Spirit of the Century. Far fewer are now likely to continue stocking the cutting edge indie products that rounded out their previous orders, and that's where there is threat to the model. The DOJ conduit is likely a fantastic consolidator, but the big question is for how long. Distributors are happy to get Dresden and Spirit, but may not be so content in the long term to get the more cutting edge, art project books. So yeah, indie press has broken out, but boo, because the incubator may be in serious trouble.

The other story here, the break out from indie, is the emergence of a system. FATE is hot and you've got a lot of ways to play it via Spirit of the Century (pulp), Legends of Anglerre (fantasy), Dresden Files (modern), Starblazer Adventures (space opera sci fi), and Diaspora (hard sci fi). Anglerre drove it home for me: you can play FATE in whatever genre you're playing now. FATE scratches that indie itch and it's widely available now through all game distributors (with Diaspora coming soon). For me, the story of indie press is the story of FATE. It's about FATE now and it has always been about FATE, at least where economic success is concerned.

Feel free to refute this, educate me, or otherwise comment. I'm hardly an industry expert in this niche and I'm only approaching it from the perspective of your average retailer.
Posted by Gary Ray at Tuesday, August 24, 2010