We post our news on Facebook/Twitter now, but here's what's been happening:

Foursquare. Facebook Places will likely nuke Foursquare, but the good news is our Foursquare marketing campaign was finally approved after several months. If you're the mayor of Black Diamond Games on Facebook, meaning you have the most check ins, you will receive a free soft drink can when you visit us (one per day). Here's the link to our page on Foursquare. Facebook Places promises to eventually integrate (possibly become) our Facebook Fan page and you can count on us taking advantage of it.

Facebook 900 Coupon. We hit over 900 fans on Facebook (941 as I write this). We're now ranked #3 in the world for Facebook fans, a ranking that I happen to be list keeper for and only I really care about, but I still think it's cool. We regularly give out coupons for every 100 new fans, resulting in a coupon every six weeks or so. This Facebook 900 coupon is a Paladin Club point multiplier. When you refer your friends, you get additional points for their purchases -- quite a few points really. It's experimental and we haven't gotten many back, but it's actually highly valuable if you do the math. It expires at the end of September. Oh yeah, and I really was kidding with that Finland comment (I've noticed a lot of new fans with funny umlauts and diacriticals in their names). 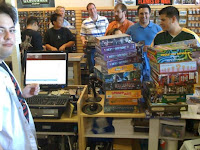 Ding & Dent Auction Sunday. Our ding & dent auction and sale is Sunday. You can bring in your games to sell or auction for store credit or you can just come and find some slightly dinged up games at very low prices. This upcoming auction is of about average size (the last one was probably twice as large). It features a wide variety of mostly current board games in smaller quantities than usual. You can also expect a huge collection of 40K to be sold in pieces. We won't be posting a list, but it's definitely worth showing up. There are some items already out on the floor, including a big tub of Reaper miniatures (German packaging), some Malifaux rulebooks, and some role-playing games.
Posted by Gary Ray at Wednesday, August 25, 2010