The technical heart of my business is the point-of-sale machine, the monster database, cash register, order processor that drives me mad on a regular basis. I mention this because POS adoption in the game trade, according to my distributors, is something like 30%. Many still use a cash register, recording what they sold on a notepad and ordering by faxing sheets off that pad or, oh god, standing in the aisles and eyeballing what's not there while on the phone with their distributor. Madness.

They order from one primary distributor most of the time, usually once a week. Then they have a couple accounts they use weekly or a couple times a month, like Games Workshop and Wizards of the Coast. Perhaps a couple times a year they have direct only accounts they contact to place small orders. Since I started small like everyone else, I can tell you it looks pretty much like this. My first couple of years I used a primary, a secondary, a tertiary that I used once every couple of months, and Wood Expressions. More were added as I went along, but I was a small player in the area, one of six stores, which was probably a good thing as I ramped up. 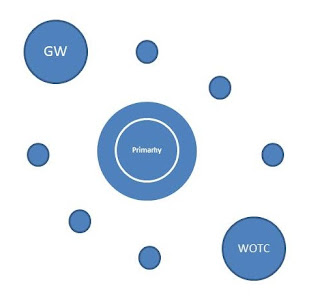 The problem with this model is stores run out of product, just as their primary and secondary distributors run out. They have no ability to find another well when their first one, or perhaps two, go dry. We saw our last competitor, primarily a Magic card shop, actually run out of Magic for weeks at a time, because they lacked relationships with enough suppliers.

Small operations also lack the ability to special order product, especially when it's either obscure or out of stock at their two main distributors. There's an entire universe of games that don't exist to them until they find the right supplier. This still plagues us and I'm always on the look out for new games at trade shows and from customers. Customers see the inability to obtain product as laziness or incompetence.

Also, for stores without a POS, managing more relationships seems daunting on its own. They're not likely to "fill in holes" in their inventory or expand beyond that notepad if it hurts their brain just thinking about it. Technology gets you beyond brain hurt. Technology can manage these relationships to some degree.

I think this is why so many stores fall down in their ability to special order or to even have their regular stock on hand. They lack the proper business relationships to satisfy their inventory needs, lack the technology to manage those relationships, and finally, lack the organizational ability (open to buy tracking) to manage the money needed to make the purchases to fill their stores. The Internet and their brick and mortar competitors wallop them. I'll also say that locally, stores with the most suppliers are perceived as the winners. They differentiate themselves from their competitors and stand out in the minds of their customers.

Our supplier universe is much bigger. I'm not bragging. This is not about money or high sales, it's about building relationships. Relationships are free although they take time to develop. These people call you on the phone all the time and want to be your buddy. They have booths at trade shows. Granted, the money to manage those relationships is not free, as in a POS system, but it has always been my belief that you buy a POS system before you open your store, not blunder into one after. Why? Because your purchasing universe will never be this big if you don't, and you'll fart along, never having the time to retrofit one. 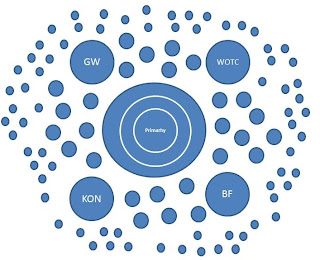 Our ordering universe has a primary distributor, who sees about 90% of our purchases, a secondary that gets maybe 3%, and a tertiary, who specializes in card supplies and quick and cheap WOTC restocks. Beyond that we have the large orbiting planets of direct sales companies that are ordered from weekly or twice a month, like Wizards of the Coast, Games Workshop, Konami and BF, which could be Battlefront for some stores but is currently Battlefoam for us. Then we've got a bunch of smaller monthly orders we process, and in the cold outer BDG galaxy, the folks who hear from us once or twice a year. In all, we have about 100 suppliers that would be absolutely impossible to manage without technology and a budget.

We add new suppliers all the time as we try to figure out what our customers want. Yesterday we started ordering from a new distributor in Texas, Brown Box, because they had different style playing cards, some Euro board games the main distributors don't have and discontinued stuff that our customers have asked for (metal spell templates for Pathfinder). We don't have money to buy from all 100 suppliers all the time, but we do have enough wiggle room to order from all of them sometimes.
Posted by Gary Ray at Wednesday, September 21, 2011