Cult of the New

The culture of the game trade is new release driven. There are simply too many bedroom publishers, Internet sales channels and upstart distributors for anyone to make money unless there's something shiny to drive sales. I spent my first five years in business only making money on strong release months. There are entire game categories that are really just new release engines, such as the various CCGs. Worse, stores are so dependent on these games that most couldn't imagine survival if say, just one of them, Magic: The Gathering, were to go away tomorrow. Many will put up with enormous helpings of crap just to satisfy their cranky CCG customers and retain their business.

The new release culture tends to distort our view of our customers. If you play a "legacy" game, it's in our best interest to move you out of the Dark Ages, albeit a dark age that may only be a few years in our past. Sometimes I look with pity on the D&D 3.0 gamers. For the love of god, I think, what do I have to do to get you to move forward, to progress?  I've had occasion to negotiate a new core rulebook deal, just to try to tempt customers to a newer edition. RPGs especially have a ton of legacy players who are just fine with their system, whether it be AD&D or Vampire: The Masquerade. As a store owner, I don't fight it (too much). I support it with a large selection of used games. Legacy D&D is our third most popular RPG if you care to track it that way. In my mind, those people, the legacy players, are the most aberrant of gamer, the grognard.

The other aberrant customer is the mono gamer. There is the classic mono gamer, the chess or backgammon player, who we really can't support. I sell two chess clocks a year, for example, and if you come in looking for a specific one, perhaps a sweep hand clock with a blue case, there's nothing I can really do for you. I am woefully unable to provide the vast supply for the tiny demand. In fact, I recently determined we could turn our backs on all classic games, every chess set, backgammon, mah-jong, cribbage, domino, and poker set and not break a sweat. But these still signify what a game store should be in my mind, so we continue to carry them.

Then there are the Scrabble players, those people who only play their one game. I can do nothing for them. We see this with a few other games too, the Settlers of Catan only players, the Axis & Allies only players, and the occasional fanatic for Monopoly. Just classic Monopoly. Shudder. We've got one Axis & Allies player who comes in a few times a year to check out our A&A selection, scavenge spare parts for A&A and generally question us about the next A&A release. For ... the ... love ... of ... god.

Aberration is obviously in the eye of the beholder, and as Cult of the New cult leaders, store owners are not immune. We are not hucksters, we are True Believers. You don't sell games for years, relying on new stuff to feed our families without it effecting our minds. I pulled the plug on my D&D 3.5 campaign the moment 4th Edition was announced. There was nothing wrong with my campaign, I was just in shiny, Cult of the New mode. The disappointment that followed, the wandering in the RPG wildnerness it led to, and the salvation of a new game to save our social group is a common story. We're all susceptible.

One of the great things about game conventions, like the many around the country this weekend (we'll be at Pacificon), is they're a celebration of gaming. You can surely see new games and even buy them in the dealer's room, but a game convention is about legacy, about all the great games that have come before that shouldn't be forgotten, and it's about the community that plays them. You can usually play any edition of Dungeons & Dragons, war games that haven't seen a store shelf in twenty years (or ever) and games that could never get the critical mass to field a single table in your local game store.  Sure, go ahead and buy that new game you've been waiting for this weekend, but if you get a chance, consider playing one of the games that has gone before. Embrace your legacy. 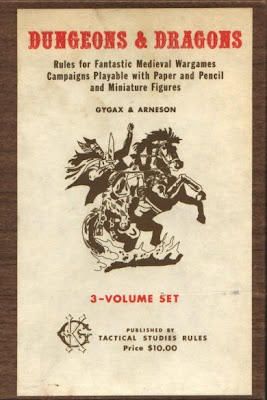