One of the few blogs I read regularly is by Seth Godin, because he's insightful, terse and provides a laser focused insight that often applies directly to whatever I'm doing (AKA not my blog).  His blog today was entitled Are You Doing Math or Arithmetic?  As it's our 7th anniversary this month (our party with free tri tip sandwiches is on the 13th), this got me thinking about how I do things now, how I did things early on and how I think most people do things. And yes, that math analogy holds up pretty strong in my case.

To summarize the Godin blog post, there's basic, nuts and bolts "arithmetic" kind of stuff that people do in their jobs, which is mostly repetition, going through the motions. Most of this is necessary, but there is so much more. Then there is "math," which is cutting edge, intuitive stuff that includes as much art and intuition as it does science. The thing about running a game store is there's a lot of arithmetic. There is enough arithmetic, rote stuff that gets done over and over, that you could very easily think that's all there is. For most store owners, that is all there is. You could do that job, fail, and blame the system, because you had no idea there was actual math beyond your arithmetic.

My game store career involved doing an awful lot of arithmetic, in fact learning arithmetic on the job. Where most experienced retailers who had perhaps worked in other stores would show up with arithmetic skills, I was still learning the basics of arithmetic, sometimes literally, trying to process margins and discounts and trying to figure out exactly how the numbers were supposed to be crunched when it was clear they were made of granite. The key for my transition from arithmetic to math was both education, as in seminars in which people who seemed like me were doing real math, as well as pure frustration. Is this it? Isn't there more? Followed by questions like, "what are smarter people than me doing?"

Math turned out to be quite a few things beyond basic arithmetic for me. It's a ton of marketing, usually guerrilla style, almost entirely social media marketing nowadays. It's merchandising and displays that push the envelope. It's better event management, better financial management, better purchasing and forecasting, better staff management, and finding and allowing others to do some of the arithmetic (and even math!) so I can concentrate on my real job. It requires making a bunch of mistakes, to be honest, hopefully with enough foresight that they don't sink you. It's about being open to opportunity, even when your basic arithmetic skills say it can't be done. Math is hard after all. Math is constantly changing for me, I'm never quite doing it right, and my efforts and aim are never quite on target. But I'm getting better at solving the big equations and I have a strong sense of awe when it comes to better mathematicians.

So while I do arithmetic on a regular basis, and must continue to do so, the key for me is to remember I'm here to do math. Usually when I find myself in need of a break or change, it's because I've fallen into only doing arithmetic. It's easy and comfortable. Managers do arithmetic; owners do math. If as the owner I find myself consumed by arithmetic, those rote activities that can consume the day, I'm doing it wrong. I'm not doing my job of evil scientist, arithmetic genius in training. 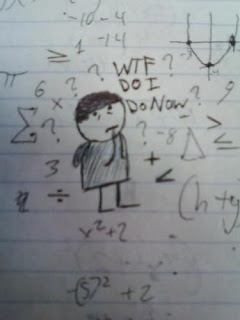