A year ago, Warmachine was one of those games on life support that had quite a few problems. First, there was no beginning or end of the range and the creep was overwhelming. Privateer Press never discontinued models, while at the same time putting out a handful each month, every month, for many years. It was one of the things people warned me about Games Workshop when I first got started, a company that does a very, very good job of managing their "SKU creep."

Second, there was no new blood, as our existing Warmachine crowd was rather insular, and informal, and not very aggressive in getting new players into the game. As a retailer, I tended to divert new players to Warhammer 40K instead, a sure thing if you wanted table time. Our primary Warmachine booster was deployed to Iraq, so we were handicapped in that area as well.

Third, Privateer Press was having a heck of a time keeping anything meaningful in production, with long outages of important product and an emphasis on new releases, many of which our insular, small crowd had no interest in purchasing. But all this changed. How?

SKU creep is still a big problem with Privateer Press, with no discontinued product, but they took some advice from retailers, myself included, and included a "core" list of product that every store should carry. The core list isn't perfect, and it contains a lot of "flavorful" models that nobody really wants to play, but by creating this core list, retailers could be assured that within the wide swath of product, they were stocking the important stuff.

Core for me meant a vow to ALWAYS stock and hunt down that product, wherever it could be found, even if it was back-ordered from my primary distributor. This worked wonders and is working well with Reaper Miniatures too, where I created my own core based on their best sellers (now they need to fix their production problems).

Privateer Press addressed their outages by taking a breather and catching up. New product releases stopped for a short time and eventually a deluge of all those core and other models finally made a return, and stayed in distribution, more or less, since then. It is still often a challenge to stock Warmachine, because of distributor outages, but nothing like before.

Finally, David, our Warmachine booster returned from Iraq and jump started our Wamarchine community. We also hired Brendan and Charlotte who play and support Warmachine pretty intensely and are often happy to introduce new customers to the game. Having the people in place to take advantage of the Privateer Press changes have been vital to the games survival in our store. What was once a game on life support recently matched sales with Warhammer 40K. 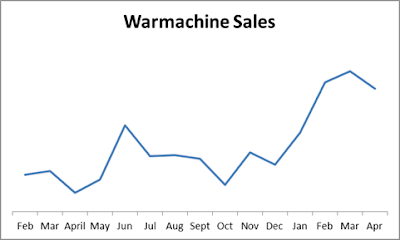 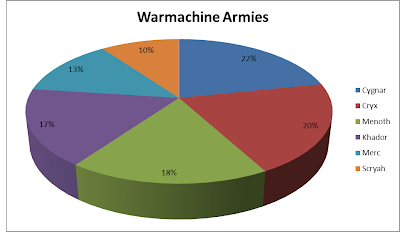