Be the Frog (Tradecraft)

The big problem with the game trade, the overwhelming, soul crushing, poverty inducer, is retailers are seen as a necessary evil by publishers, and in some cases, an unnecessary evil. They wish us to embrace their game, build communities, but they don't want to allow us to sell their game unhindered. It is always their game. They are always their customers. Unlike many other trades, they interfere with us directly, in a variety of ways, which undermines our ability to do our jobs. Here are some of the most common models for this:

Control Freak. In this model, retailers are not trusted to do their job. A big aspect of this is the MSRP, the manufacturers suggested retail price. When you put an MSRP on every, single, product, combined with reduced margins, you hamstring a retailer by dictating the narrow range of their business model.

For example, the toy trade has "net" costs, or the amount you pay for the product, and no MSRP. You sell the game for what you want. You could "keystone" it and sell it for twice that, getting a 50% margin, which might be baseline. You could sell it for less than keystone and try for volume using a discount model, and most importantly, key in this discussion, you can sell it for over keystone and try for a boutique model, possibly in a higher income area. Your store will have higher costs, but you can cover them with your higher margin sales.

In the toy trade, there is a range of prices, both in brick and mortar and online and a range of business models for selling that product. The game trade's combination of MSRP and dictated discounts means we're squeezed on both ends, narrowing the potential business model. A game store business model is necessarily in a narrow window,  fairly low rent band of American retail. There is no possibility of moving up without changing your product mix beyond hobby games.  MSRP is why game stores are low rent. Net pricing is the solution.

Control Freaks also include things like tight event restrictions. Companies like Pokemon USA, and Privateer Press want their organizers to be independent of stores, and in the case of Pokemon, special events are meant to be as independent from the retailer as humanly possible, including collection of fees. Konami's new tournament format is so onerous, that it was the final straw with our Yugioh community, a community we've asked to disband. We talked about doing a big, regional Privateer Press event yesterday, but we can't pay our Press Ganger to do it and employees can't be Press Gangers, so it requires a true volunteer to do this, or less qualified employees. I think we'll pass on that. These companies don't allow retailers the creative control they need to run their businesses successfully.

Cream off the Top.  In this model, retailers are allowed to sell product, but the intent is for the publisher to get the easy money, the cream off the top, or low hanging fruit. Games Workshop does this with their stores, which are said to serve beginners, but as they know, the beginners spend twice as much money as the veteran. The new player spends about $1000, their first year, compared to around $500 for the veteran player, at least before they hit a critical mass.

Paizo also does this with their subscription model, which is why there's so much hostility about carrying Pathfinder in game stores. The "alpha" players subscribe or otherwise buy online, which cuts out the game store. Unless you have a large community, you can't sell Pathfinder as a retailer, because you don't get enough critical mass to overcome competition from Paizo itself, who also has a full online discount game store to back up their product. Organized Play for Pathfinder Society is also a spotting service of sorts, identifying communities where the game is strong for the publisher.

Games Workshop has taken this further recently, significantly reducing key (not core) inventory from game store shelves and enticing customers to buy direct from them instead. We can still get these models, but at a margin that discourages us from stocking them regularly. They've also come out with product sold only on their website, which also leads to customers buying direct. Once you split sales, your turns begin to falter and the line stops performing at adequate levels. This type of behavior wouldn't be tolerated in many trades, but game store owners do.

Direct Disintermediation. The biggest of these is Kickstarter, a direct sales channel for both established and new publishers. Granted, there are plenty of small publishers that use this model, which really just supplants other channels in the game trade. Much of this product is unsellable at retail, so I don't begrudge that. It's when a company uses Kickstarter as their new pre-order model that they disintermediate game stores.

The biggest example is Reaper Miniatures with their Bones product line. Their second run of bones is clearly just a pre-order system for direct sales to customers. I would like to think carrying their slow selling line of metal figures for years would result in some form of loyalty to the retailer.

I was recently contacted by a representative from one of my favorite authors, hoping we could run some organized play for their far future fantasy role playing game in our store. All game products are first sold via Kickstarter. I regularly have the "this game is so good" discussion with my regulars, who tell me I am right, and that they already own this product. So why in the world would I want to run organized play for this game that I essentially don't sell? What starts on Kickstarter can stay on Kickstarter.

Direct Disintermediation also includes the various online company stores and heavy sales of new releases at conventions. Some stores in the Midwest truly dread Gencon, as it sucks up all the regional sales of new Summer releases for an entire month. Others find ways to leverage Gencon, but most are hurt pretty bad by publishers selling direct to customers. They tell us they have to do this to afford to go to the convention, because apparently there is no money for a marketing budget.

It's so uncommon for a game publisher to not disintemediate their retailers, that you can count the big ones on one hand, if not a couple fingers. Wizards of the Coast probably stands head and shoulders above the others, although lately with their D&D organized play, they've dipped their toe in the water.

Until We're Big Enough. Finally, the goal of many publishers is to reach game trade nirvana and sell to mass market retailers. Companies like PSI (really, just PSI) rep the game trade to Target, Barnes & Noble, Gamestop, and other big retailers, putting hobby games in front of millions of non gamers, but also under cutting game stores who work every day to promote these games. We're told this is the only way the trade can grow outside our little ghetto, which is kind of ironic considering the many kicks to the balls retailers receive on a daily basis.

In some cases, the game disappears entirely into the hands of a mass market publisher, like the selling out of Apples to Apples and Blokus to Mattel, an example of the game trade making a game popular enough to transcend it. I missed these games during the holidays.

How We Do It. You could despair as a retailer, especially if you're new or having a hard time. You could curse the darkness. You could focus on everything wrong and nothing that's going right. However, that's not a way to succeed. The way forward is a stumbling, two steps forward, one step back. It's keeping a positive outlook, maintaining stability in your business, and doing what small business does well, quick adaptation. If you're growing, you're winning, and there's not much more than that.

When a company behaves badly, they hurt us. When they behave really badly, they give us no choice but to drop them from the mix. The key is diversification so that nobody, I mean nobody, is so big, they call the shots. Not Wizards of the Coast, not Games Workshop and certainly not the completely tone deaf Konami. We switch things up, we drop what doesn't work, we support what does, until it doesn't.

You know what? This is really not good for the publishers. It alienates the customers. This is exactly why they think we're dispensable, a necessary evil. But it's a situation of their own making. You can do it. You can succeed, you just have to be nimble and understand: these guys do not have your interest at heart. They are not your partners. They are your competitors too. 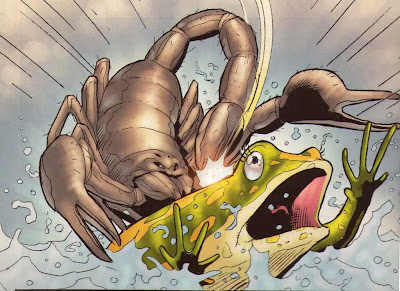