In Part 6 we looked at furniture and fixtures but I kept equipment for this post.

The biggest piece of game store equipment is the point of sale system or POS. The thing you need to understand about the POS: They're all terrible. All of them. Just bad. Worse, they've realized there's no money in selling software packages, so they have required service contracts that cost you hundreds of dollars, year over year. I have to renew mine next week: $599. Some have moved to hosted systems, with monthly fees and regularly introduced innovations. In the past, you bought a system and didn't see feature upgrades, sometimes ever.

There are several less bad systems out there, with the top ones being Microsoft Retail Dynamics,  Lightspeed, and Quickbooks POS. If you're heavily into Magic singles, there's also Crystal Commerce. It does this one thing well. Again, they're all terrible, all with pros and cons. I used Microsoft for nine years and Lightspeed Pro for three years and I don't recommend either. I tried Crystal Commerce for a year and couldn't make it work like I wanted. My advice is avoid traditional systems and go with a hosted system, like the cloud based offering from Lightspeed.

A hosted system saves you money up front, but requires a monthly subscription fee. Lightspeed charges $169 a month for two licenses (your POS and a license you'll need for remote access). You'll also need a computer, a barcode scanner, a receipt printer, perhaps a label maker, and a credit card terminal, which will be provided by your credit card processor. You'll also want a laser printer for signs and general office work.

A hosted system not only avoids the headaches of installation, but avoids the issue of backups and off site storage. When I started I had an elaborate tape backup system with G-F-S rotation and offsite tapes that went home every night in a briefcase, like some kind of spy. Ridiculous. Avoid this.

A hosted system also isn't going to require a $185/hour IT consultant to install and maintain it, which will easily cut $1,000 off your start up costs. A hosted system assumes you've got stable broadband in your store location, which you really won't know until you're there. Talk to the neighbors and see what they're doing. It took us seven years to get decent broadband in our current location. Commercial spaces are woefully behind homes when it comes to broadband.

Next, go get yourself a sweet laptop. When you're not working on your POS, which will be be nearly all your waking hours, you'll be crunching numbers and talking to game trade professionals on your laptop. This is going to be your constant companion for the next few years. Get something that won't annoy you. Get the best PC or Macbook Pro. I was in IT for a decade working on Microsoft products. The best decision I made for my sanity was moving to Apple.

There are other things you'll want in the category of equipment. I'll just list everything below: 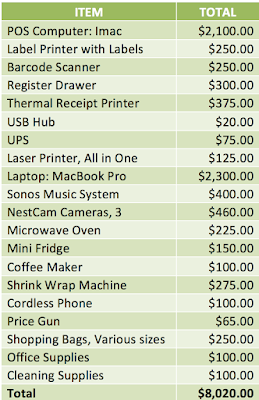 You're going to be spending upwards of 60 hours a week your first year in this place. You want it to be comfortable. You'll be eating many meals here, alone, by yourself, usually standing, so we've got you a mini fridge, microwave and coffee maker.

You'll want security cameras to figure out whose been shoplifting and possibly to record break ins. A streaming music system creates ambiance in your store, a requirement for retail. Make sure you're streaming something that's royalty free or with a commercial option (Sonos has this ability). I debated the shrink wrap machine, but its ability to replace damaged shrink wrap and bundle items you want to clearance puts it high on the list for me starting out. You could get it later, I suppose, but it's useful right away.

Am I missing anything important? Next time we'll go over some professional services you'll want to engage up front: Website designer, accountant, lawyer. You'll want their help setting you up and then only engage them occasionally.

Check out Part 8 for professional services.

EDIT: Just a note that you could easily choose to save some money by going with PCs instead of Macs. I do believe your Macs will last at least twice as long as the PCs, but if money is tight, it doesn't matter with a hosted POS solution. I tend to destroy a PC laptop within about 18 months through regular use, so I wanted something that lasted longer.
Posted by Gary Ray at Saturday, September 03, 2016