I came from the Information Technology trade and I'm really good at spending other peoples money. In the corporate world, IT is called a cost center by the finance people for a reason. When I started the business, this OPM (Other Peoples Money) mentality skewed a lot of my decision making, mostly because it hadn't sunk in that it was my money, which might have effected my spending habits.

I had no idea what I was doing, but I was intent on building the best game store ever. It turned out to be a beautiful thing. Too beautiful. It was ridiculously expensive with an unrealistic ROI. ROI was never part of the discussion. I was overly proud of myself until I learned about ROI, and how my return was in the distant future. Having an amazing store with a painfully distant ROI is like being proud of the Porsche your parents bought you. Settle down, junior. I spent too much, but you don't have to.

Lets look at FFE, Furniture, Fixtures and Equipment in detail:

Furniture: You'll need a couple chairs, a desk and your game center furniture. A 1,000 square foot game center can seat a max of about 66 people (I'm using multiples of 6 since our tables will fit 6). So figure 66 chairs and 11 tables that fit 6 people each.

Your office will house the desk and desk chair. You will hopefully spend very little time here, usually when the store is closed. The drafting chair is for the work you'll be doing at the register. There is a stupid amount of data entry in this field.

You can skimp on chairs, but I suggest you go with commercial grade chairs used in schools or churches. Those Lifetime chairs? They're certainly not good for a lifetime. We throw away several each month, at least until they're gone and we order in more school chairs. I hate Lifetime tables, since they get permanently grunged up over time, but they're undeniably the best choice. We're experimenting with some Ikea tables with our mezzanine build out, but I can already tell you they aren't as durable.

Fixtures: Figure out your initial product mix and then figure out the fixtures you need. Lay out your store with software or with graph paper. Read about cash wrap layout and figure out what goes against each wall. If you're miniature heavy, you'll want miniatures on the wall. Games Workshop will provide free racks for your GW stuff.  There aren't any book shelves on the plan below, but you may end up substituting book shelves for gondolas. This is going to be highly variable, but I believe the costs will be roughly the same.

You need commercial grade fixtures to hold your product. There are cheap ways to do this (milk crates, gridwall, pegboard) and there are more sophisticated ways (slatwall and such). Like an inexpensive destination location, cheap fixtures signal that you're not interested in attracting the general public and you are focused on hobbyists. You might personally be focused on hobbyists, but we need the money in the pockets of the general public to get to your desired income level with this model. If you're not willing to sell what the general public wants, you're probably in the wrong business.

I'm going to assume you class up the joint a bit with slatwall and avoid cheap fixtures, milk crates, or shelves you bought at Ikea (which are bad, but not always). If you're talented and enterprising, by all means build your own fixtures. I have no such skills. Also, there's usually no great discount in ordering your fixtures all at once, so be sure you don't overbuy. If you know when you're going to open, you can also hunt for used fixtures from stores that are closing. Several game retailers are pilfering their local Hastings as I write this.

If you're new to retail, you probably don't understand traffic patterns. I recall realizing my dead ends were impeding sales. I had too many fixtures (new fixtures are expensive but used fixtures are worth close to nothing). I also bought twice as much slatwall as I needed, paneling the place from about two feet from the floor to the ceiling.

These are estimates from a while back, so prices may vary: 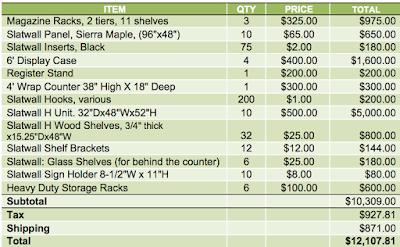 Equipment I'm going to leave for part 7.  The big equipment question nowadays? Should you buy a full blown POS system with the database stored locally or should you use a hosted solution? Also, should you invest in a website with the advent of social media? Does it still play an important role? Let me know your thoughts on this stuff.