World D&D Day went off well, despite some early schedule confusion (my fault). We had four double tables set up for games and they went non-stop all day. The adventure turned out to last between an hour and a half and two hours, so DM's tended to run several adventures in a row. Thanks to the DM's for that!

The last session of the day was short players, so I played the dwarf cleric. It was classic (but fun!) bad play. The overly curious halfling rogue opened the forbidding sarcophagi of the ancient dwarven lord and it chased him through the dungeon and killed him. The party split up and at one point two characters fought monsters at the bottom of a chasm they had fallen into while another one was attacked by the ghost of the dead halfling. It all ended well with a tough boss fight. Characters fell and were healed and the casters ran out of spells. It was a touch and go finish but it ended well. I haven't run my own D&D game for several months now due to the move, so it was refreshing to get to play again. 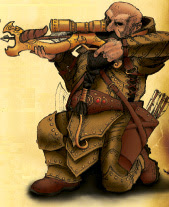