One of the topics that nobody will discuss in the game industry forums is prices and margins. They're afraid of getting in trouble as an industry for price fixing, something usually preceded by a bunch of people getting together and discussing such things. As this is more of a one-way medium for the most part, I think we're fairly safe from the feds (as I look over my shoulder).

There are changes going on in the game industry that are upsetting its very structure. The cost of oil has thrown a monkey wrench into the works and it's threatening to break the model (I hope). In econo-speak, the game industry model doesn't deal well with inflationary pressures. Everyone is feeling their costs rise substantially due to the cost of oil, fuel for the trucks and ships that move the games we play. Because of the flawed industry structure, everyone is expected to pass on these costs, except the retailer.

Starting at the beginning of this problem, the game industry is stuck in a discount/freight mode. They're obsessed with discounts, which translate to margins. Margins have shrunk over time, but the baseline margin nowadays is 50%, referred to in retail as keystone. Most store owners believe 50% is necessary for survival, although overall, across all lines, we're around 45-47%. This is considered a trend that has harmed the retail tier of the industry.

For example, When I buy a $50 board game for my store, I expect to pay $25. We've gone over this before, but there is a small profit inherent in that $50 purchase, around $4 or so. Squeeze that 5% margin by selling me that game at $27.50, like Days of Wonder does, and the store makes significantly less money.

The problem at the manufacturing end is the cost of production has gone up and they're afraid to raise their retail prices. Rather than raise that $50 game to $52.50, possibly alienating their customers, they attempt to squeeze that money out through the tiers of the industry, lowering the margins for the distributors and ultimately the retail store. In the case of Days of Wonder and their train games, they did both. The retail store can try to raise the game to $52.5o, and I often do, but the concept of an MSRP, a manufacturers suggested retail price, widely known and available, makes this difficult. How do you compete with an online discounter that sells a $50 board game at 30% off when you sell it for even more than the established retail price? I don't think it's an option.

This assumes a certain level of good will on the part of the manufacturer. The general feeling is that manufacturers are all hoping to one day lower discounts and put retailers over a barrel once the retailer can't do without their product. I think is is generally not the case, but certain companies (cough, Upper Deck, cough), deal in such predatory price practices that it tarnishes the industry and makes retailers suspicious. For example, the World of Warcraft card game had a reasonable, albeit low, discount when it first came out, but since then the margins have been squeezed by Upper Deck. You want the next release? We'll you'll pay a couple bucks more now. That doesn't exactly build good will (bastards).

Distributors have been loathe to meddle with discounts too much, because they're much more replaceable than a top selling board game. If one distributor mucks around, I can go with another, and I often do, even with the distributors that I love. There are lists of items that I buy from only one distributor because of their prices and some items go back and forth as discounts and retail prices ebb and flow. Although the number of distributors is shrinking each year, there are still a good number of options. Instead, distributors have discovered a more transparent mode of passing on their costs, shipping.

Part of the odd game industry discount structure is the use of free freight as an incentive. If you buy $300-$350 in games at one time, they'll ship it for free. The cost of shipping has gone up tremendously, leaving the distributors and manufacturers in a pickle. Shipping is no longer an incidental expense. They've been forced to adjust their free freight limits or add flat fees to their "free shipping." For example, Wizards of the Coast has free freight at $300, but there's now a $5 charge on all orders. At least this seems honest.

So what's the solution? Ah hah! I actually have a solution this time! The solution is to dump discounts and MSRPs. In the game industry, items outside of the discount model are known as NPI's, or Net Priced Items. Everyone pays the same for these items and the retailer can choose how much to charge for it. Let the market set the price. Net priced items are usually black sheep, mass market schlock, and often close in price to what you would pay at Wal-Mart. It's the industry's way of saying, "Look, you asked us for this crap, and we paid an arm and a leg because we have no leverage, so here it is dufus, do with it as you wish."

Net priced items work well, provided the manufacturer/publisher doesn't declare a MSRP. There's more than one way to make such a declaration. For example, the World of Warcraft CCG came out as a net priced item, but Upper Deck sold the cards on their website at a certain price, creating a de-facto MSRP. That MSRP put the discount at around 38-40%; total crap. Net priced items only work when everyone is on board with them.

CCG's are a good example, since all CCG's are net priced items in the marketplace. The discounts have been so marginal for so long and the online price pressures so effective in pushing down prices, that the price of CCG's vary tremendously from store to store, even in the same town. One store may sell a booster pack for $3.99, while another without much local competition or next to a school might sell it for $4.99. Boxes of cards are all over the map too, with $145 boxes of cards sold online for $5 over cost. It's what the market will bear and it sorts itself out.

For example, I sell single packs of Magic for $3.99 and boxes of 36 for $99.99. I sell WAY more single packs, despite the average cost of boosters bought by the box being $2.78. I've learned that pack customers and box customers have different price expectations. I learned this on my own, through trial and error, without a distributor telling me what to do. I learned that $109.99 is too much for a box and nobody will buy a single Magic booster for $4.19 (although you can do this with games played by younger kids). The retail price of a booster is set in stone in the customers mind, reinforced by the MSRP, while the retail price of a box of boosters is more fluid.

The toy industry is a good example of net priced items. The whole concept of discount and net priced items and free freight don't exist. There is the wholesale price. In fact, they just say the price. Everyone knows it's wholesale, we didn't just fall off turnip trucks. The price I pay for the Love Me Tender singing Thomas the Tank Engine is $10. I can charge $20 if I think a 50% margin is a good markup and my competitors are priced similarly.

As for free freight, I always pay for shipping, unless I'm getting a special promotion. I can choose to add freight costs into the price, probably adding another 5%, but I can adjust as shipping costs rise. I would be foolish not to, unless competition forced me into it. I might charge $22 for Elvis Thomas if I think the market can bear it, and when shopping at toy stores, I see the range of prices. Nobody blinks. Nobody throws a fit in the train aisle claiming Love Me Tender Elvis has a clear MSRP of $20.

Unfortunately, I don't know how the industry can do this unless the biggest distributor, Alliance, simply does it. Or maybe Hasbro (aka Wizards of the Coast, Avalon Hill, etc.) does it. It scares the hell out of many retailers, but I would welcome it. 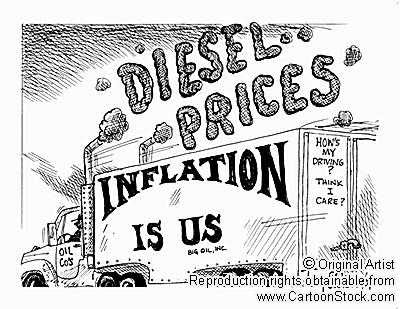