I live in Richmond. Despite the perception of many friends from the store, I've never been shot or shot at, had my home burglarized, my car stolen or have had problems with gangs. Like other urban areas, there are good parts and bad parts. However, when I drove across the country touring game stores before I opened Black Diamond Games, it was clear Richmond didn't have the proper demographics. In other words, not enough core customers: geeky white guys (and now Asian guys). I knew I wanted a store, but where?

The most obvious places were Berkeley and Oakland. These are densely populated urban areas with highly educated people with moderate incomes. This wasn't just obvious to me, as there were and still are, half a dozen strong game stores in that area. Whenever a new one pops up, I have to carefully ask the owner if his head was screwed on straight. Surely there are areas that are under-served.* I started driving around and plotting out Bay Area game stores on a map. It was so dynamic, that some were failing before the ink was dry on my map print out. Four years ago there were many stores, and they came and went with increasing frequency. The Bay Area was looking too crowded with stores, so I started looking outside the Bay Area too, even considering Wisconsin, which my wife shot down pretty quickly. I visited stores in Sacramento and Davis, but these offered too little reward for requiring a relocation. After all the research, the obvious choice was Pleasanton, and I started scouting out available properties there.

Pleasanton is a strange town. It's got a high income level and plenty of geeky white guys (and Asians), but the place is spread out along the 580 very thinly. It does poorly on the magic formula of retail customer predictions, the ten minute drive time. Within ten minutes of anywhere in Pleasanton is a much smaller community than what you see on paper. It just didn't compute. Nevertheless, it seemed like the most under served location, plus it's a major commuter corridor, so I went ahead with my plans. I had an industry expert perform a feasibility study. This is where I give him a big check along with a bunch of raw data on the locations, including photos and lease rates, and he writes me up a report saying which is best or if it's even worth opening a store in that area.

I was working as a network architect at Kaiser in Walnut Creek at the time and there was this open location right off the freeway. I had to sit at the endless light at the Treat exit off 680 North every day, and this little spot kept staring me in the face. I threw the address into the feasibility study, even though it was nothing like the Pleasanton locations. When the feasibility study came back, sure enough, the Pleasanton locations were awful. There just wasn't enough critical mass of customers anywhere in the area to justify a store, and four years later, there haven't been any new stores to pop up in that area. The Walnut Creek location blew the doors off Pleasanton, and the much shorter commute time sold me. Walnut Creek was it. Plus I could manage the build out during my lunch hour.

Negotiating that first lease would have been impossible for me today. An inexperienced business owner with limited funding and resources is often at the mercy of whoever will take them. Back then, however, I was flush with cash from my home equity and help from an excellent business partner who understood numbers and finance. I had an excellent business plan that tended to impress people, mostly because I could write well and my partner made me rework the numbers until they made sense. Business plans are essential, by the way, although like a military plan, they rarely survive contact with the enemy. Mine was no exception, although it was key in my first year survival.

We moved three years later, true, but the Walnut Creek store wasn't necessarily a bad location. It was centrally located, with small enough expenses to avoid a lot of risk, and although we didn't have enough game space, that limitation forced me to learn about games that other single owner stores with plenty of space would have ignored. All games sold equally well, requiring equal effort on my part, which is unheard of in a modern store with play space. The Walnut Creek store had it's limitations, like bad parking and increasingly cramped space, but it was a starter store that allowed me to make mistakes, and I made many.

The Concord location was born from the fact that the Walnut Creek store was too small to support me adequately. I wasn't making enough money, long term, so the solution seemed to be a much larger store. This has since turned out not to be the case, as the risk has gone up without a corresponding reward, but it's still early in the new stores progress (plus we've been in recession that whole time). The Concord location was determined with customer data. Paladin club members give us their address so we can send out mailings. This information was plotted out on Microsoft MapPoint, which created a pretty map showing the location of our customers. Many were from Walnut Creek, which was normal, but there was an obvious concentration to the north, in Concord, Pleasant Hill and Martinez. I found it strange, but to the South there were very few customers. I learned there is a kind of demographic income height at which you lose customers. Those making a six figure salary tend not to be gamers. Perhaps they're too busy working all the time to play games.

The Concord store was build based on the data from the Walnut Creek store. One thing that I'll mention is that I now think the idea of a suburban game store is a bad one. Looking around at other stores, I think the best idea for a game store is to place it in the highest concentration of people you can find. Suburbs have a population density that I think is too low. On top of that, suburban folk are much more isolated from sub-cultures like gaming, and much more in tune with popular culture and consumerism. They certainly buy things, but it won't be some strange game. I base this theory on the limited success we've had being the only game store in the region. Compare the data of our store to the half dozen in Oakland and Berkeley and you'll likely scratch your head. There should be more stores out here, but there just aren't enough customers to make it work.

That said, our holiday sales are up 10% so far in December. I know some of that is because many competitors have closed. Some if it is the San Francisco Chronicle article about board games that mentioned us. Some of it is also being open a year, since last year we were open only a couple months before the holidays hit. I'm curious how things would look without the recession. Hopefully I'll find out next year.

You can read about how we selected the store name here.

* Areas that I would consider placing a game store: Pinole, Alameda, perhaps a mall store in a major Bay Area indoor mall, if the price was right. 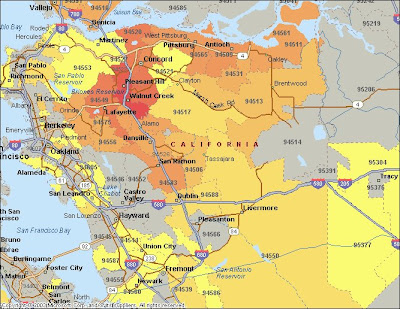