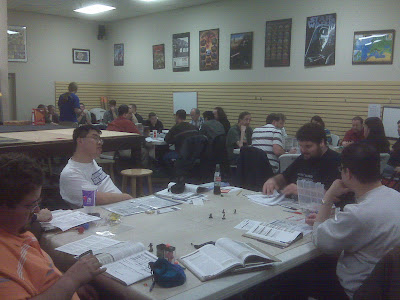 On Thursday we had record turnout for our weekly RPGA event: 25 people at 4 tables.

The new Dungeons & Dragons Forgotten Realms RPGA program has been very successful, as I've mentioned before. They're less restrictive on their format as a way of encouraging people to play D&D on a regular basis.

We used to run Eberron RPGA using 3.5, which was a mess. The adventures were poorly written, character rules were obtuse and the format was rigid. Now adventures are high enough quality to where we're going through lots of toner to print extra copies for the volunteer DMs. Before, we couldn't give away the pre-printed dreck. Also, 4th Edition is better suited for organized play, as there's less ambiguity in how a character is created. I recall downloading a half dozen 3.5 pre-gen characters from the Wizards website and spending an hour correcting them. Looking back, 3.5 almost seems subjective when it comes to character builds, or at least complicated enough to forgive the inevitable errors that would creep onto character sheets.

But do you like 4th Edition?
After six months of playing and running 4th edition, I've become a bit more critical of the system. The best criticism I've heard, which I'm kind of agreeing with, is that it's a fine system, but it's not my D&D. That's just saying it's different really, but there's something to be said for the lost continuity between 4th and previous editions. It still has that 3.x problem of feeling like a role-playing game until combat begins, when it becomes a tactical miniature game. Luckily I like tactical miniature games, but the jarring transition often leaves me cold.

My real problem is it feels a bit sterile for the players, which drains some of their enthusiasm. I'm hoping that aditional accessory books, like Player's Handbook II, will add some variety to their options. But aren't I really just saying I wish it was more like 3.5, with a bigger toolbox?
Posted by Gary Ray at Saturday, January 24, 2009