We spend most of today re-arranging the store. Yesterday we focused on opening up the layout of the board game area. There are times when you want a grotto, a closed off area that designates it as special and focuses foot traffic (hopefully not a ghetto). The down side to the grotto is it can be a literal dead-end. Customers won't walk down a dead end passage, even if there's something interesting down there. It's a psychological block. So it was either open up the dead ends or relegate dead product to that space, which seems kinda dumb. It's a balance between limiting access and theft or opening up traffic and increasing sales. Traffic wins eventually.

Today we took on the big issues. The toy department is shrinking, while the miniatures department continues to expand. We expanded the miniatures by moving the Schleich toys over to the "Mom's Lounge" area, replacing comics in that location. With the comics next to it, my mom's lounge had become a slacker, pilfer, loser lounge. It was a magnet for trouble. We've already moved the "muggle" games to the toy department, and I believe it hit a psychological tipping point. It's no longer a solid toy section, it just seems toyish. 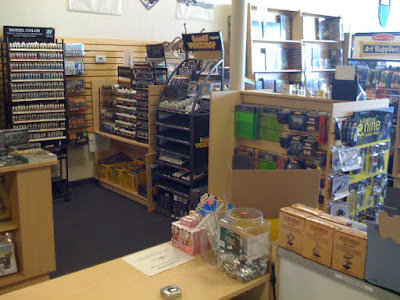 Expanding the minis department let us put all the paint in the same place and opened up more wall space for racks. 40K blisters got expansion space as did Flames of War boxes. It also feels more open. 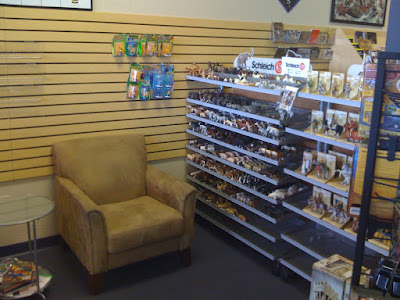 The mom's lounge, now with friendly animals rather than challenging comics. I also noticed the chairs are grubby. Gotta fix that.

So with the minis section expanded into the toy department, and the comics moved out of the mom's lounge into the role-playing area, we then tackled the most hated of store fixtures, the D&D racks. 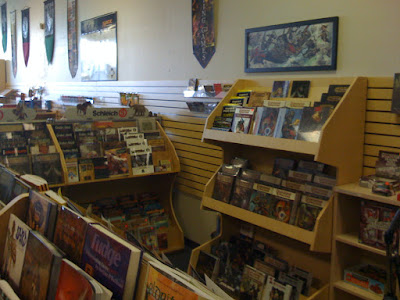 I've had a love-hate relationship with the metal D&D racks, now in a dumpster. They were ideal for our crowded little store and I acquired them from other local game stores that had outgrown them. However, they became increasingly fiddly and annoying in our larger space. Now they're replaced by this single, three-tiered magazine rack, with everything faced and visible. To the right of this is the board game clearance section and to the right of that are the used RPG shelves. The area feels more cohesive now.

So in case you were keeping score: