The Year for Fantasy

For the first time, the store is in the position of having the inventory we want and a reasonable purchasing budget available for product expansion if something comes along. Last year you saw us expand our 40K selection to where it is now, complete. It's not complete because I'm a completist (I've kicked that bad habit), our 40K sales actually justify it. We also hit our "turn rate" numbers in 2008, surprising since as late as October I wasn't predicting this until late 2009. Turns are about inventory efficiency, kind of a retail store MPG rating.

Although holiday toy sales were down 50% from last year, and while on sale at that, their departure from the store provided us some breathing room, both in physical space and inventory dollars. The miniature section just expanded, eating up 20% of the toy department, and much of the toy dollars are now waiting for re-allocation towards shiny new games. The toy demand over the holiday solidified what works for us in that area of the store. Learning toys and craft toys will stay, and jigsaw puzzles will expand, especially Ravensburger. "Inert" toys that don't have a purpose will go.

What's becoming clear to me now is Warhammer Fantasy will have its year in 2009. With a new league starting up in the store, and many new players starting up the game this month, it will likely see an increase in inventory. Right now we've got an incremental expansion method, where I'll add new fantasy releases to the regular inventory, allowing for that "inventory creep" that store owners warn everyone about. I've also been paying attention to what people are buying and gradually adding a blister or box here and there, often when someone special orders models that we're not carrying. A more robust expansion of Fantasy is possible, but the demand needs to be solidified in-store. It's not there now. In other words, I want to see a lot of games going on and sales increasing. Eric and Andrey deserve a lot of credit for getting Fantasy off the ground.

Oh yeah, and can you imagine a possible resurgence of Lord of the Rings? The miniature game will soon get a revised rule set, re-focused as an army based game rather than skirmish. Will be giving that a shot.

Finally, we quickly liquidated a lot of Flames of War, and we're now re-focused on late war releases. 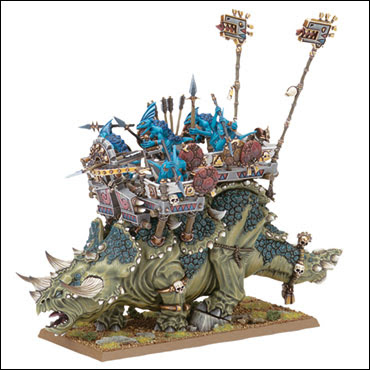