After playing a bunch of 40K games lately, I've determined that about 75% of my losses were due to just not being aggressive enough. That other 25%, unfortunately, is army composition. 40K is one of those games where you can build a really cool army that loses a lot. Mine is based on a character named Al-Raheim, who leads his men into a flanking attack. He and his men almost always die, but it's an awful lot of fun to watch, kind of like a train wreck. Sometimes, if the flank isn't a hornets nest of enemy troops, he can survive to win the game. So my new list doesn't include him. It's a less exciting mechanized veterans list. I'm going to see if winning can be as fun as characterful for a while. 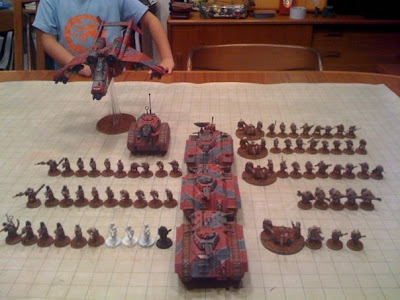 1100 Points of Imperial Guard (they will all be painted by Monday). It's an odd number, based on a reserve rule in our campaign. At 1000 points, the list swaps out the Executioner for a Demolisher and one vet squad loses it's chimera and rides in the Vendetta.

Strategy:
CCS stands with PCS and line troops to give orders and hold objectives
Veterans go on the attack with chimeras
Vendetta and Executioner agressively distract from the veterans