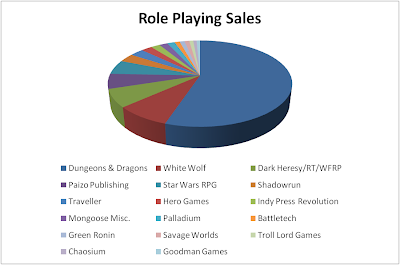 Dungeons & Dragons still dominates role-playing sales in our store, but there has been a mini revival over the last year, with renewed interest in older games and some great new games, such as Rogue Trader, Warhammer Fantasy Roleplay, and Hero 6. Pathfinder has found its legs too. This has dropped D&D from its startling 75% market share in our store to its less alarming 3.5 levels of around 55%. You lose Mayan calendar!

If this chart looks familiar, it's probably because it's similar to many business charts for mature marketplaces. Mature markets eventually have a leader that takes the kind of unassailable position we see with Dungeons & Dragons. You'll find products like the iPhone, Hewlett Packard printers, Internet Explorer, and Coca Cola with similar positions. They're household names like Dungeons & Dragons. It's a kind of economic natural selection. Celebrate diversity, but accept reality.
Posted by Gary Ray at Saturday, November 28, 2009