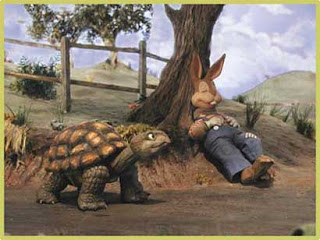 November sales were shockingly good for us, 34% higher than last year. This was lead by collectible card games, board games and role-playing games. Those are the kinds of numbers you expect in year two of a store, not year six. Talking with other retailers, they also saw a big increase. The reason is clear if you experienced the economic free fall of 2008.

Last year, the nation had just witnessed the collapse of our financial system. Everyone was holding their breath in November, staying home under the covers. A 34% increase from near Armageddon level sales isn't a lot to crow about. Still, we're up about 12% from 2008, showing that perhaps game stores are counter-cyclical after all. Just don't expect to reap the rewards during boom times. I'll replace my "think inside the box" slogan with "slow and steady wins the race."

If the recession is over, small business survivors have hopefully learned some lessons from it. I've learned when to expand my business and when to hunker down. I've learned how to tighten my belt, while still investing in what's important, like staff. I've learned the value of money, and the danger of relying on banks and creditors, who don't understand the ebbs and flows of my business. Cash is king, as cheap credit will be hard to come by for some time. That bodes ill for an economy that's powered by small business.

I'm not sure how small businesses will grow in the future. Like cholesterol, there's good debt and bad debt. Bad debt is an oppressive drag created out of desperation, like financing your groceries. Good debt is an investment in the future, like a home purchase or student loans. Our business has cheap debt from our move and expansion that we're paying off, but any new debt, necessary for expansion, is far too expensive or non-existent.

That means our business and many others, will need cash to expand, which is not how it's supposed to work. That will require a much longer period before we can grow; both the pay down (which is normal) and the saving up (which is not).  This lack of credit is why you're hearing all the talk about a very slow economic recovery.  Slow and steady will have to win the race, at least until there's money to fuel the economic engine.
Posted by Gary Ray at Thursday, December 03, 2009