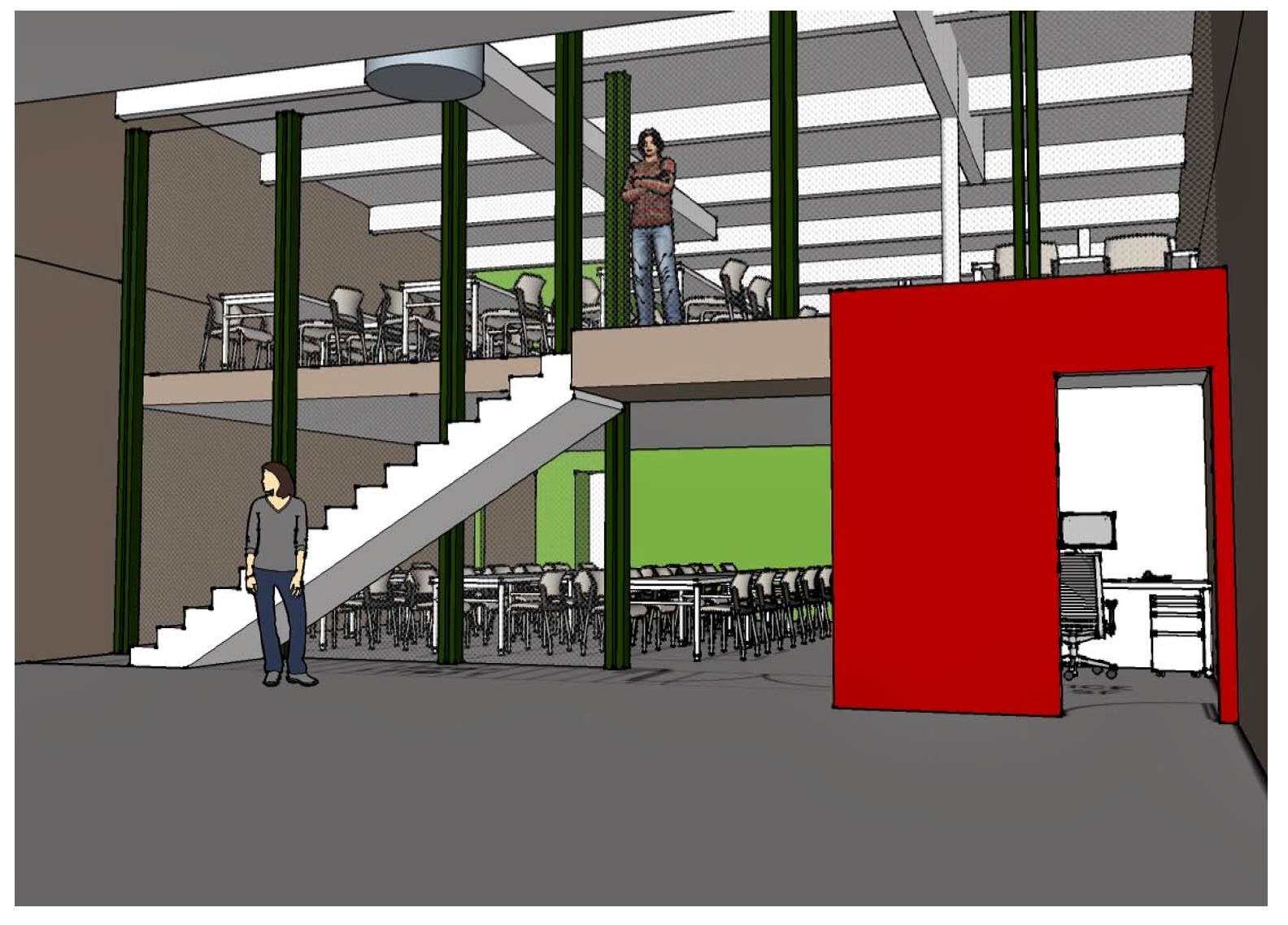 It looks a little dangerous in that picture, what's going on?

We're opting for what they call "architectural metal mesh," technically an interior fencing material that will go from top to bottom facing outward towards the store. The actual mesh style hasn't been selected yet, so I can't tell you exactly what it looks like, but it has distinct advantages over the glass design we looked at. It's cheaper, easier to keep clean, has better visibility and less of a cramped feeling in areas that now have lower ceilings. Most important, it has excellent air flow. I suppose it's also safer than the usual balcony you would see installed in this scenario. And yes, the staircase will have railings.

What's the seating? Why not make it even bigger?

The space will be rated by the fire marshal for 123 people, which is significantly more than we can seat now. The formula for building a mezzanine, which is what this is technically called, is no more than one third of the bottom space. You can finagle that number by adding an office, but not by much. In addition, we are required to have restrooms -- many restrooms -- to accommodate the crowd. The restrooms are the biggest expense of the project and eat into square footage significantly.

Are you losing retail space?

A little bit. To hit the target number, I've given up some of our retail space for the stairs and landing. We're losing about 10% of our retail space, notably the back wall. We'll be re-designing the store layout to make the shift. The front right portion of the store (as you walk in) is poorly utilized, so we'll see our board games better take over that spot. Puzzles will likely be condensed down to one, spine out shelf. Toys, what's left of them, will be gone. Overall, inventory values will stay the same. As an FYI, we generally increase our inventory 5-10% each year.

I don't see an elevator, where is that?

Doing some research beforehand, we successfully argued an ADA argument known as "equivalent facilitation." Equivalent facilitation means if I have a movie theater, for example, I need to facilitate a wheelchair bound person to see the movie, but I don't need to get them up on the balcony to do it. Since we have game space on the top and bottom levels, we have equivalent facilitation, so an elevator is not required. However, and this is big, any event going on in the store will need to be cognizant of this rule, so if you have someone who needs handicapped access, the event must make room for them on the bottom floor. Events and event coordinators will need to be flexible in this regard.

You have such a tiny office!

There is both an office you can see in the front, and a small storeroom for event materials on the top floor. But yes, we're losing significant office and storage space in this layout. The office is the least efficient part of a retail store and shrinking it down in exchange for generating revenue is a good trade off. We will have storage issues, for sure. Nobody actually works in our office, so a dedicated space is kind of a waste.

Does this mean you'll have more open gaming?

No. During the day, the top level will be closed, as we don't have staff to supervise it. During the evening, we'll have extra staff and additional standard events scheduled for the top floor. The goal, for us, besides an ever increasing community, is to be able to generate additional revenue from the space so it pays for itself. There are a lot of things that investment could have done, including a whole other store somewhere else, so it needs to pull its weight.

When will it be finished?

Good question, as the project moves forward, there could be snags along the way. Right now we're about to begin the engineer's evaluation. That will look at HVAC capacity, sprinkler systems, structural beams, and re-routing various equipment in the ceiling. That report will inform the architect's drawings, which will then need final approval and permitting from the city (the city has initially approved the concept). There is a loan process at some point throughout this and in the end construction, which will last 3-4 weeks, with no store closure and probably a week of game center closure as the top floor is build.  I'm hoping for Summer.

Let me know if you have additional questions.
Posted by Gary Ray at Thursday, January 16, 2014