Since our Kickstarter funded, I've been asked to write magazine articles, speak on a blue ribbon panel (whatever that is), and talk about my experience on a podcast. I did the podcast, but the other opportunities were more about sharing my experiences so other small businesses could replicate our success. I don't believe we conventionally succeeded with our Kickstarter, so I'm not inclined to sing its praises and claim mastery.

There have been thirteen game store Kickstarters, of which only three have reached their funding goal, including ours. The other two include The Raygun Lounge by Gamma Ray Games, and the more recent Endgame Cafe by Endgame in Oakland. What do these stores have in common?

First, they were established. They all had existing communities to draw upon and business track records showing they tended to do what they promised. Endgame has been around for 13 years and has a stellar reputation, Black Diamond Games (us)  has been around for 10 years and is generally well respected, and Raygun, the youngest, was at 3 years when they ran their campaign a couple years ago. I don't know much about them, but the cesspool that is Yelp gives them four out of five stars.

The other nine failed projects were primarily new stores. It's highly unlikely a new store will be able to tap any sort of local base to accomplish such a project. When we talk success, we're also talking in the $28,000-$48,000 range. That, friends, is actually not a lot of money for a construction project, and by all accounts, doesn't cover the full costs of any of these projects.

Second, all stores were to build a new space. Endgame is planning to build a cafe to host local events and provide food and coffee drinks. Raygun went from seating for sixteen people, really not a legitimate game space, to a much larger event space with food and a bar. Black Diamond Games plan to go from a respectable 64 seats to 121, with no addition of food or beverages.

Third, as was pointed out to me by Robert Pace, who tracks these campaigns, projects for food related projects tend to be more successful. That's also a principle of "third place theory" in which food and drink play a prominent role. If I were to do this over, I would study third place theory pretty extensively and make sure I was ticking off all the boxes.

My own observation is you need to offer a significant improvement over your current offerings. If you're happily playing in our 64 seat game center, you may not see the value in adding additional seating. You're getting value already. It's not a significant value add, and in fact, may be disruptive to the value you're already receiving. If you're going to do a Kickstarter to add space, add something more significant than more of the same; perhaps a soda fountain, coffee shop element or snack bar.

When we considered our Kickstarter campaign, we figured our target audience was based on the Pareto Principle, the 80/20 rule. Based on our research, 20% of our customers use our event space. Those people would care about this project. What we got instead was what I call the Altucher Rule, which is what happens when you get 20% of your 20%. That, as you can imagine, is a much smaller number (This rule is also used by Seth Godin as the core group of clients for whom you want to tailor your service).

Fourth, our rewards were weak and I would suggest putting them at the market value to attract the other base we were looking for, everyone else online who knew about us and wanted to help. Our custom PDF Pathfinder adventure was $25, which assumed you were contributing more than the value of the PDF to help the store, since the market value of such a thing is perhaps $10. That's great for fundraising, but how many more people would we have gotten if we had priced it at $10?  The costs of providing more PDFs would not have gone up. Could we have had a much wider draw, those who kinda wanted the adventure and were willing to help?  With only 18 backers at that level, my guess is yes.

So those are my four big take aways: Be established, offer a significant value add over what you currently have, consider concessions, and offer rewards at the market rate.

What else? As part of "be established," make sure you've exercised all your social media muscles. We are heavily reliant on Facbeook, with nearly 5,000 fans of our page along with 500 people on our direct email list. We aren't active on Twitter, online forums, nor any fan based mediums. I am very active with the game trade community, which is how we eventually succeeded.

Our problem with communication was our dependence on Facebook. Communication was very expensive, and I spent well over $1,000 on promoting campaign posts.  Worse, results were intangible. It was difficult to see who was sharing, what was being said, and if our message had any reach whatsoever. That's the walled garden of Facebook. It's an area in which we need to improve, and that's after spending tens of thousands of dollars investing in Facebook as our core marketing medium. Make sure your social media strategy is multi faceted.

Thanks again, especially if you were one of the 224 people who supported our project! 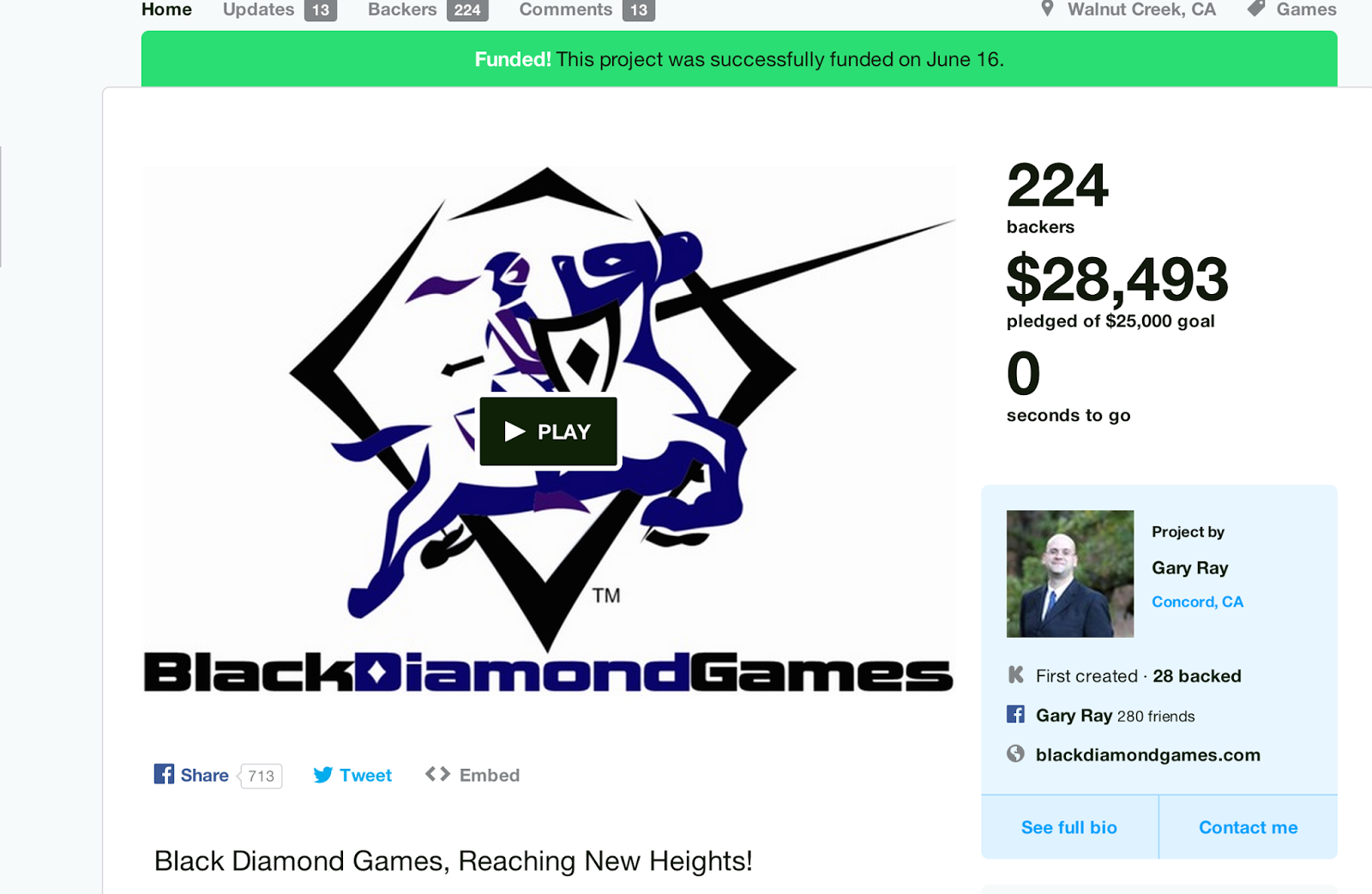